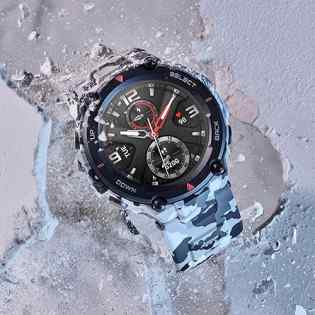 Huami is preparing the launch of one of its most interesting smartwatches for 2021, and it is the Amazfit T-Rex Pro. It would be a more resistant smartwatch than the original Amazfit T-Rex.

This smartwatch is generating many expectations, more than anything because it will have, according to the latest leak, greater resistance than its predecessor that would make it one of the most durable and all-proof wearables for adventures, excursions, and outings of all kinds.

The smartwatch is said to hit the market with a circular design and an AMOLED screen with 360 x 360-pixel resolution, and Corning Gorilla Glass 5 for protection. In turn, in terms of the resistance of the watch, we would have a 5 ATM (50 meters) for submersion in water and, although it has not been mentioned, a military-grade certificate, just like the original T-Rex.

On the other hand, there is also talk that it carries a 390 mAh capacity battery that can provide a range of up to 18 hours with average use, 9 hours with intense use, and 40 hours with continuous use and GPS activated.

The Amazfit T-Rex Pro will also come with Bluetooth 5.0 for pairing with Android 5.0 and iOS 10.0 devices or higher. It will also be built in a polycarbonate body and will have the following dimensions and weight, respectively: 47.7 mm x 47.7 mm x 13.5 mm and weigh 59.4 grams. It will be released in black, green, and gray versions.

Finally, the GPS pack would be quite complete, with GLONASS, Galileo and BeiDuo included. In turn, on the list is a heart rate sensor, a 3-axis accelerometer, gyroscope, geomagnetic sensor, ambient light, and barometric altimeter.

The Amazfit T-Rex Pro released in March 2021 worldwide at a price tag of $179.99,  £139 Euro, and AU$249. For Buying it on Amazon, it might take a couple of weeks to get the Smartwatch accessible on Amazon, while you can check all Amazfit Smartwatches on Amazon.

ABOUT US
Topandtrending.com is one of the fastest-growing websites. Top and trending is your news, entertainment, top 10 best, music, fashion, sports, tech, games, mobile site. We provide you with the latest news from around the world.
Contact us: topandtrendingofficial@gmail.com
FOLLOW US
© 2020. Developed with ❤️ by team Top and Trending
MORE STORIES
Smartwatches