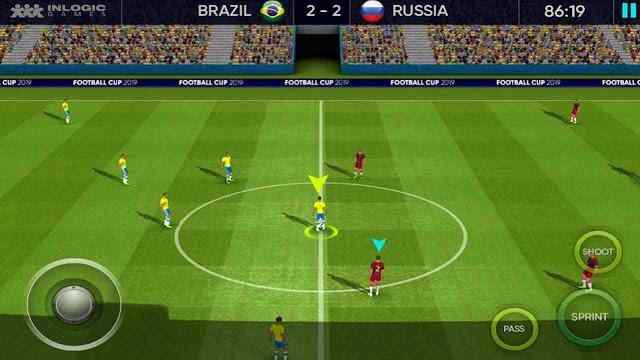 Best Android Soccer Games. The reason why football games will never end is because of the people who are strongly influenced and attached to real football sports. Countless people love this sport and love to play Android games based on these sports. This is the reason why game developers are focusing on creating the Best Android soccer games.

Android football games are the eternal games that are still alive in this world. There are no limits that would never end football games as people increasingly like to play Football with their game consoles, smartphones, etc. And this trend will never diminish.

The developers of Android football games are not lagging, as they have all made it possible to make all of the popular premium console games available to smartphone or tablet users. Finding the best Android soccer games is not an easy task; it is a daunting task, as many soccer-based sports game apps are published on the Internet and are available in the Play Store for Android.

Create your team by selecting unique players from different clubs around the world. The ability to create an exceptional team and create custom stadiums for better visibility and a better experience has allowed this game to reach the top. Configure the game your way, and it helps to play with all the attention, this feature has led players to become addicted to this game.

The latest version of the game in the most popular series is carefully developed and has a multitude of graphic effects as well as many features. Players should navigate through the list of features in this game to know the quality of the experience of this Android soccer game.

Choose from different football clubs. This game is also one of the best Android Multiplayer games, select the multiplayer mode, and play epic matches with your friends and family; everything is so simple and instant.

The fastest soccer game and arguably the game with the best controls that allow players to move players, give directions and attack very easily against the opposing team. FIFA 20 can be downloaded for free on the Android platform. Make sure your device can handle this graphics-rich game of around 1.5 GB.

If you are a powerful Android Gamer, you probably like to play games with high graphics. PES 2020 is one of the best Android soccer games with excellent graphics and various game modes.

You can play with your Android, challenge your friends online, and even participate in multiplayer matches. The game claims to have more than 8000 player animations and characteristic team play styles. Its latest update improved the gameplay and made it all more powerful. It’s worth trying.

An ideal choice for casual players playing soccer on Android devices. The game is not defined with complex strategies, but the user can take advantage of it to play it freely. Ultimate Soccer doesn’t lack rich graphics, but looks without superb gameplay may seem less enjoyable for some gamers. Do you feel tired or under pressure from a long day at work? Play this casual Android soccer game and feel the goals scored in the posts.

Start as a footballer in a club, and determine your playing position, hire agents to help you manage your finances, train yourself to gain experience, and do much more to build your professional career. Help your team win and surpass others to grow and earn rewards to position yourself as the best player in the world in the game. The experience becomes phenomenal when paired with nice graphics and breathtaking gameplay. Try this soccer game on your Android device, and you will learn a lot more about building a professional career in soccer.

Create and manage your team, then take on your friends or other players online in multiplayer. Guide your players to play the strategies you have designed to win the competition. Nearly 170 million players have chosen this game to play Football! Want to know why so many users are addicted to this game? If so, then install this 2020 soccer game on your Android device and start playing, but be careful, as you could also get addicted.

Are you an expert in soccer kicks? If so, install this soccer game and try to score on goal in different situations and different positions on the field, while your opponents will be there against you. Check your slow-motion shots from different angles and learn great strategies. This game consists only of penalty kicks from Football and has no full-time game.

With simple and minimal graphics and no real players, Slide Soccer makes playing football always interesting. There is a well-defined field with players from different teams represented by colored circles. Thanks to the controls, the ball is moved to give a good kick in the goalposts.

The Multiplayer mode allows players to play and compete with other online players around the world. Apart from all these features, the levels of Slide Soccer are exciting to play. Install this little soccer game in no time using the Android play store, then start playing it for free.

Real Football is another cool Android soccer game, this time from the leader of mobile games, Gameloft. The game comes with licensed football players and teams. It offers a wide range of game modes in which you will show your skill in Football. The game offers good graphics and allows you to customize your team, form a team, and upgrade your stadiums. You can also interact with other players by sharing videos and photos.

Football Strike is another popular soccer game enjoyed by millions of people around the world. This game is considered by many to be the best real-time multiplayer soccer game for Android.

There are different online modes, such as Quick Match and Shooting Mode, or alternately as a striker and goalkeeper in the Individual Free Kick mode. Football Strike is developed by Miniclip, which is already a legend in the video game industry. The game also offers many customization options if you have a creative mind. Even if the game only provides short challenges, it is still enough for your enjoyment.

Soccer games or soccer games on Android are best when played with a real competitor. The multiplayer mode of football games allows users to compete against other players who also control the selected team. What is most important for any sports-based mobile game is that the graphics and movement of the game should be realistic.

Hope you enjoyed our list of the best Android soccer apps, thank you for sharing it with your friends and family. TopandTrending thanks you for reading and your visit, you can leave your comments if you think we have missed a game or if you have something to add.