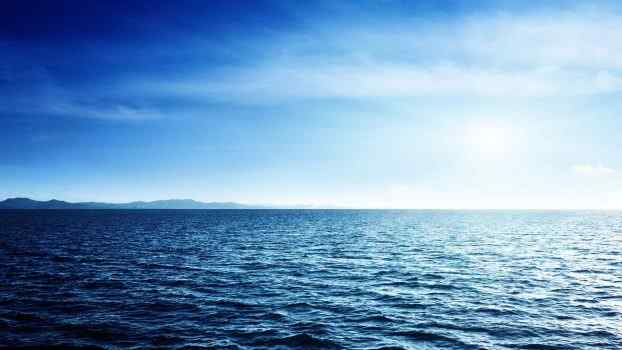 Best Aquatic Perfumes For Men. Nature, freshness, & the desire for independence, are some words that can perfectly define the best attributes that a good perfume has to have before even taking the step towards forming brands, however, we did not come to talk about this, but about something much deeper.

For many years, aquatic aromas have been taken into account to make perfumes some that remain in the minds of men and they have succeeded, however, from our point of view, there are perfumes of this nature that remain engraved on the skin of those who wear them.

These 10 Best Aquatic Colognes for Men have been a trend since they were launched, however, they had never been gathered, but until an article as complete as this one where we review what their distant and emblematic aromas are capable of, so do not you let it pass and try them to dream of tomorrow.

One of the most iconic perfumes that have aquatic scents for men, we have to mention Davidoff’s Cool Water, a scent that set a trend when it was launched in 1988 to the point that it is still a trend today. It belongs to the Aquatic Aromatic olfactory family for Men and there cannot be a more faithful aroma to water like this. 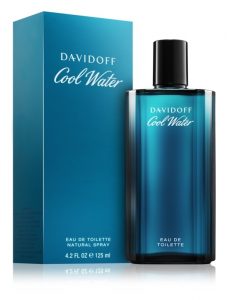 It is a strong perfume, perhaps too much, with a lot of aromas, but also with many accords of the sea, this is of course due to its notes of seawater, mint, neroli, and green notes. On the other hand, its aroma has a lot of fresh flowers if you like, a product of notes such as lavender and jasmine, in addition to boasting of being a perfume with even room for woody oakmoss and cedar.

With perfume, so you have to decide very well to use your time and what better than the summer to enjoy the best waves in the bright sun.

The Italian scents and those that have a lot of the Mediterranean are the ones that most stand out for men, among the aquatic ones and this Chrome by Azzaro, the work of Gerard Haury, is living proof of this. This perfume was officially launched in 1996 and has a lot of classic as many modern touches. 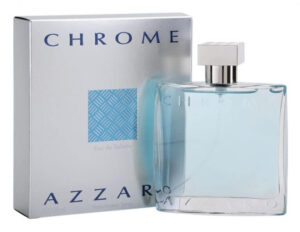 An aroma like this that belongs to the Citrus Aromatic olfactory family for Men already has the cards thrown and that is why it does not surprise at all, but that does not make it disappointing. Rather, its notes of acidic lemon, bergamot, and pineapple make everything citrus and tropical feel with a lot of presence, being also its notes of neroli, Persian violet, and jasmine those notes that give a lot of delicate flowers.

The adjective fresh cannot be missed, especially because it has oakmoss, in addition to cedar as another of its notes. This will also let you know that this perfume is perfect for summer and has moderate longevity along with a soft trail.

The most classic Ralph Lauren style is infused in the Polo Deep Blue Parfum, a scent that has several really interesting notes as well as being very cleverly manufactured to provide a stoic and elemental perfume. With the Aquatic Aromatic for Men olfactory family on its side, this scent is freezing.

Carlos Benaim decided to shield its aroma with notes of green Carlos Benaimot, cypress, geranium, marine notes, patchouli, and musk. In this way, its aroma has several phases where the cold does n, it stops being present, being a rarity because it is enjoyed in a tropical and citrus company, although a little sweet.

On the other hand, its aroma has a good amount of fresh musky aromas that are superimposed on time due to its long-lasting longevity and moderate trail. However, this perfume that should be worn in spring has a sweet and spicy side that invites you to have a good time on casual dates.

No brand tries to leave its strongest stamp on each scent as Bvlgari is, and Aqva pours Homme proves it during each use you give it, being a perfume that bases its scent between citrus, marine, and fresh, works from a master of aquatic perfumes for men such as Jacques Cavallier and which was launched in 2005. 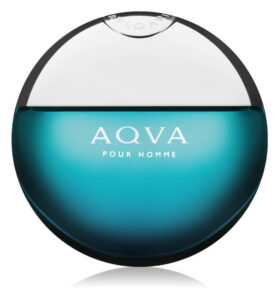 Its aroma surprises a bit when used for the first time, especially due to the inclusion of notes of tangerine, orange, or petitgrain that bring out their best tropical side and want to party with citrus. It also has seaweed, lavender, Virginia cedar, and patchouli that give its olfactory sensation the power of being both aromatic and marine and fresh, something that gives many points in the face of such leisurely autumn.

It is worth noting that this aroma, which has moderate longevity and a heavy trail, also plays with being a perfume with some touches of fresh flowers and therefore is charming for the women who are with you.

Chanel is an expert brand in launching aquatic perfumes for men, and that is why the Allure Homme Sport is a perfume that can never be wasted. Launched in 2004 and belonging to the Woody Spicy olfactory family for Men, this perfume boasts all the most special incentives of aquatic aromas. 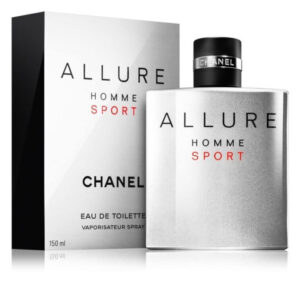 Jacques Polge was the one who laid the first stone when launching this perfume on the market, however, a few notes of orange and red mandarin were enough to get that the first thing that you feel in this perfume is an overwhelming and very tropical citrus touch. Its aroma is also loaded with the freshness that you notice how the seas and aldehydes generate.

It should be noted that it also has its own to have a strong sentence for notes such as pepper, cedar, and vetiver. It is a scent for the summer and has long-lasting longevity while its trail is heavy, undoubtedly very manly.

To have a perfume manufactured by Issey Miyake is to do it with one that is original and then give way to a lot of depth, in this sense the L’Eau d’Issey Pour Homme is a perfume that defines this very well by the Japanese manufacturer. 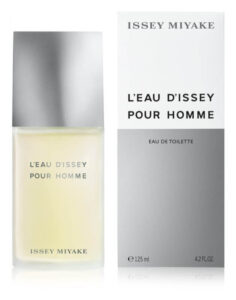 The aroma of this particular perfume comes from the Aquatic Woody aromatic olfactory family for Men and that is why it has so much attachment to the sea and is even salty in a certain way in its olfactory perception. This perfume, which was also the work of Jacques Cavallier, is a scent that has an essence linked to the citrus and even sensual to then give way to the aromatic and green.

Some notes of acidic lemon, bergamot, and mandarin will tell you immediately that it is a perfume for the summer as well as others of sage, coriander clone and saffron will give you an enormous amount of depth, making its aroma one that you will not often taste in your lifetime. However, its longevity has a long mark as it is very durable, while its trail is rather gentle and soft.

Another of the most characteristic perfumes of those that are aquatic for men is the Versace Pour Homme Dylan Blue, a scent that is rather original and little resembles its namesakes from the sea. However, it must be reviewed to understand it and it is linked to the Aromatic Fougere olfactory family for Men and launched in 2016. 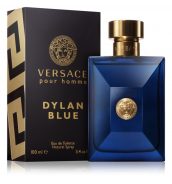 Understanding this perfume by Alberto Morillas is not easy, never any aquatic perfume for men contained so much heat and we owe this to him for its notes of amber, black pepper, ambroxan, and tonka bean. It also plays with its citrus touches from bergamot and grapefruit, although it is also conditioned with aquatic notes and violet leaves.

The whole perfume as a whole generates a lot of sympathies because it also has spicy heat inside, being then quite appreciated for its constant humidity. The scent of its bottle is perfect for spring and also has long-lasting longevity and a similar trail.

8. Happy For Men by Clinique

We continue with the aquatic perfumes that perhaps separate a bit from their brothers and now it is the turn of the Happy For Men by Clinique, a scent that was launched in 1999 and that belongs to the Citrus Aromatic olfactory family for Men. High quality product, this perfume bases its operation on chords of notes of mandarin, lemon, marine notes, acid lemon, green notes, pink jasmine, cypress and cedar. 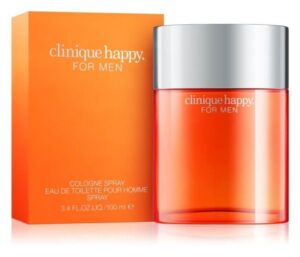 With this you will be able to enjoy a perfume that has a very citric as well as herbal aroma, its aroma being also a highly coveted one in winters due to its strong presence of wood, something that generates a little heat. It also asserts itself with long-lasting longevity and a heavy scent.

Kenzo is used to breaking into the American and European market, and that is why L’Eau Kenzo Pour Homme Hyper Wave is a scent outlined towards success and independence, values ​​of aquatic perfumes for men. This one, in particular, was released in 2000 and was the work of Alexandra Monet and Olivier Cresp. It has few notes, such as mandarin orange, marine notes, and moss, which make its aroma extend a lot to the citrus, but also the exclusive maritime. Its smell is a bit mossy, besides t and something earthy, this makes it a perfume for fall and it has moderate longevity and a heavy trail.

10. A Garden In Mediterranee by Hermes

We culminate with Un Jardin En Mediterranee by Hermés, an aroma that defines a lot what it is to have a perfume with water, especially since it was Jean Claude Ellena who designed it and included what has to do with everything woody and aquatic as possible. This one was launched in 2003 and features the Aquatic Floral Men’s olfactory family as its best attribute. 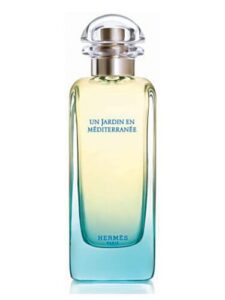 Notes of bergamot, lemon, tangerine, cypress, musk, Virginia juniper, and pistachio give its aroma a correct mix between forest, citrus, freshness, sweetness, and flowers, becoming a perfume that is too complete for even lovers of other aromas they will enjoy.

But it is that this scent so summer has a strong essence of spicy freshness that really liberates all your senses equally, something that not many perfumes can boast. For this reason and also because it is an aroma with long-lasting longevity. Thus, it is usually associated with the masculine to the full.

Do not expect this perfume to accompany you in intense moments since its essence is so and even better to know that it will be ideal even in elegant appointments.

Getting an aqua perfume represents a lot since the first time its aromas were launched because it defines what a man is both when he is alone and when he is well accompanied, that feeling of independence and freshness that is linked to intense moments.

But what these ten aromas already presented will make you obtain also has to do with the fact that they free you mentally to be able to enjoy their companions, especially citrus fruits, and that in times like summer is where they bring out their best attributes.