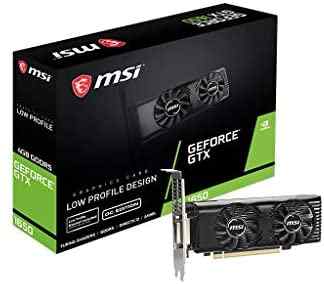 Best Budget Graphics Cards. In the low-end and price range, some GPUs will allow you to enjoy video games with acceptable graphics quality and at a resolution of 1080p. We will not be able to put the graphics to the maximum nor put many filters to improve the quality of the image, but the gaming experience can be even better than in the consoles of the current generation, Xbox One, and PS4, it is not necessary so never underestimate those GPUs which you will see below.

We went down to the 135 euros range to present this Radeon RX 550, the most discreet model in AMD’s RX range. This graphics card is at the level of a previous generation R7 250 and is compatible with AMD’s FreeSync dynamic updating technology. The specifications of this GPU are up to 1206 MHz frequency, 128-bit memory bus, and 512 stream processors. Besides, it installs 4GB GDDR5 memory at an effective speed of 7000MHz. Consumption is only 65W.

In terms of performance, we shouldn’t have a problem with Full HD resolutions removing the more powerful filters from current games and playing around with some texture quality options. For this price, we can’t ask for much more.

Although the GTX 1650 range did not surprise us and we decided not to include it in this list. The GTX 1650 SUPER 4 GB GDDR6 convinced us. Again, we picked Zotac as one of Nvidia’s best value-for-money assemblers. For only 175 €, it’s a 100% recommended purchase. This model has a base speed of 1725 MHz, 4 GB of NVRAM at 12,000 MHz, and a 128-bit interface. If we add to all this a radiator with a double fan and a chip that barely heats up. We have one of the best options on the market for playing Full HD.

Although we were not very happy with this RX 5500 XT series from AMD, we find it interesting to include this model, as we know that in a few months its price will drop significantly. On this occasion, we have chosen a 4 GB Gigabyte Radeon RX 5500 XT OC as one of the cheapest models. It includes a very good quality heatsink with two fans that will leave it very cool. It has a base frequency of 1647 MHz and the one with turbo goes up to 1845 MHz. There is the possibility of acquiring an 8 GB model and with a Windforce X3 heatsink.

In our opinion, this is the most recommended custom model of the GTX 1050 Ti that you can buy. For less than $ 200 we have a deluxe presentation, featuring an aluminum heat sink with copper heat pipes that will keep the GPU at peak temperatures at all times. In our analytical tests, at no time did it exceed 61 degrees, even with overclocking. In addition, it has a maximum frequency of 1506 MHz from the factory and 4 GB of GDDR5 running at 7000 MHz. Overclocked Power consumption never exceeded 150W at any point, and we could comfortably play at over 60 FPS in games tested at Full HD. In 2K testing, we also got an interesting 50 FPS in games like Battlefield 4 or Doom 4, so we are talking about a really good product.

Another interesting aspect that places it compared to the other two models is that it has a capacity of 4 screens, with 2 HDMI instead of 1.

What do we have for less than 100 euros? Well, Gigabyte’s Nvidia GTX 1030 OC. This version is an evolution of the GTX 1030 with a passive radiator that we have already tested in our test. In this case, we will get an improved frequency up to 1544 MHz, as well as 2 GB of GDDR5 memory at 7000 MHz. With this small graphics card, we can play multimedia content at 4K and 60 FPS, which makes it a very good option for small multimedia equipment. But we can also play, of course, at 1920x1080p resolutions we shouldn’t have any problems with the average or low quality of games like Overwatch, Doom 4, and Battlefield 1, so more than enough for this price.

ABOUT US
Topandtrending.com is one of the fastest-growing websites. Top and trending is your news, entertainment, top 10 best, music, fashion, sports, tech, games, mobile site. We provide you with the latest news from around the world.
Contact us: [email protected]
FOLLOW US
© 2022 Developed with ❤️ by team Top and Trending
MORE STORIES
Graphics Card