Home Technology Evolution of Storage Devices From Oldest to Newest 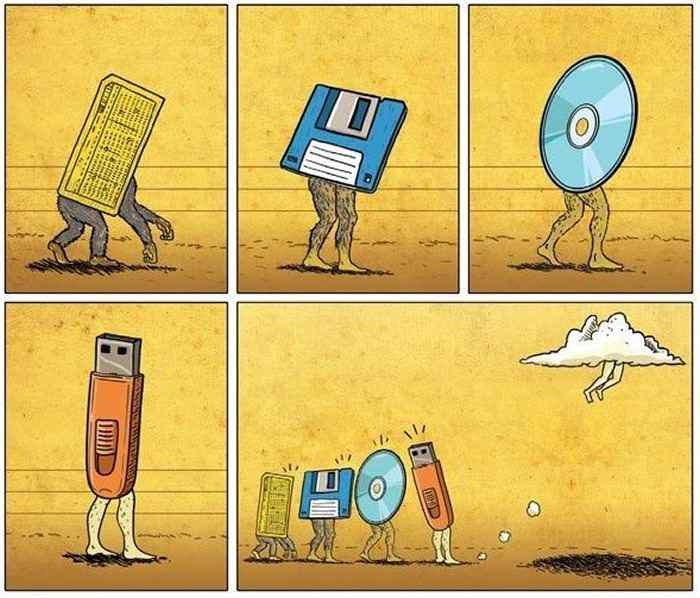 Evolution of Storage Devices From Oldest to Newest Technology

We may not realize it, but data storage is an integral part of our daily lives. Today, it would be difficult to do without it. From installing Windows 10 on our brand new SSD hard drive to transferring a PowerPoint presentation to a USB key, storing data has become an essential and natural action. Here below you will know about the Evolution and Generation of Storage Media Devices and how technology has improved in the minimum time period.

What is meant by Storage Devices or Memory Space?

First of all, it is necessary to understand what is meant by storage spaces . This computer term generally corresponds to the various means and supports at our disposal. These allow us to store our computer data permanently. Compared to random access memory (RAM), this technology exists mainly to assist the processor of your computer or smartphone in the data processing.

Offline Storage or Memory — Offline storage spaces which include all physical “traditional” storage media. Those who must be inserted directly and materially into a system to have access to the recorded data. We can commonly cite optical discs such as DVD , USB key or hard drive.

Online Memory or Cloud Storage — Online or “  cloud  ” storage spaces are a more recent method for backing up data. This technology generally consists of depositing your files on an online platform. Neither the hard disk nor any other medium is useful. The concept is thus to be able to access it on different devices.

The Evolution of Storage Devices Over Time: From Punched Cards to Floppy Disks

Among the most popular storage services, you have Apple’s iCloud, Google’s Google Drive, and Microsoft’s OneDrive. We will have the opportunity to talk about it in much more detail in the third part of this article. We can categorize the different Storage Media into five distinct generations to find ourselves in this historical ranking.

The first generation corresponds to that of physical storage media. Historically, the ancestor of the various computer storage media that followed one another remains the punched card.

In 1887, Herman Hollerith invented the mechanographic machine considered to be the dinosaur of our current computing devices. Using the punched card, this machine was used during the census of the American population of the time. Indeed, the use of the card has greatly facilitated the storage and reception of information on the person enumerated.

Herman Hollerith’s mechanographic machine and punch cards were successful, which allowed him to found his company Tabulating Machine Co. in 1896. In the year 1917, it became IBM (International Business Machines Corporation). IBM dominated the computer market for a very large part of the 20th century. Note that this was before the rise of competitors such as Seagate and Toshiba .

During the same year of 1887, the American engineer Tolbert Lanston will use punched tape, an evolution of the punched card to create his Monotype printing typesetting machine . This technology consists of storing the text entered by its user and then transforming it into fonts and ultimately printing the recorded text.

The second-generation concerns magnetic storage media. The first means of storage of this generation is the magnetic tape invented by the German Fritz Pleufmer during the year 1928. The latter has evolved a lot during the 20th century, and the oldest among us will surely still recognize it, especially in VHS tapes.

This magnetic tape was the most widely used format. During the 1950s, this medium was used as a storage medium for computers of the time. Today, VHS tapes are still used. Their storage capacity can reach 5 terabytes and their incredible resistance of around 30 years.

This generation is marked by the rise of IBM, which specializes in the design and sale of computers and hard drives. Indeed, Reynold Johnson, of this same company, invented the first hard drive. IBM designed this computer innovation at the request of the US Air Force and is codenamed Ramac 305 with a capacity of 5 megabytes for a price of $50,000.

IBM did not stop on the invention of the hard disk, because in this generation of magnetic media, they are also designers of the floppy disk in 1967. This computer storage medium equips IBM 370 computers. It measures 3.5 ‘ ‘ for a capacity of 1.44 MB of storage memory and a price of 70 francs during the 80s.

The Evolution of Storage Spaces Overtime: From the Optical Disk to SSD Disk

It was 10 years later that the companies Sony and Philips marketed the first CDs or Compact discs . They have a storage capacity of 700 MB. Their use is mainly for music recording. Currently, compact discs are on the market at a price ranging from 5 to 10 euros.

In 1988, the optical disc lost its influence after the arrival of its recordable version: the CD-R. This innovation allowed ordinary people to burn their own discs at home using a computer and a burner drive except that this recordable compact disc was not rewritable. It was not until 1997 that companies brought to market a rewritable version of these optical discs, the CD-RW .

In 1995, the Japanese companies Sony, Toshiba, Panasonic, and the Dutch company Philips invented the DVD. This is characterized by its greater storage capacity compared to the CD. DVD-17. It can indeed reach 17 GB of storage memory. It wasn’t until the late 1990s that Pioneer released the recordable version of these optical discs, DVD-RW.

At the beginning of the 21st century, Sony and Pioneer collaborated to bring out the Blu-ray disc in 2006. Compared to its predecessors, the latter stands out for its exorbitant storage capacity. It can range from 25 GB to 200 GB of storage memory. Currently, it is used in particular to store very high resolution videos.

Regarding the fourth generation of storage media and the latest generation of physical storage media, you have flash storage media comprising SD cards, USB keys, but also SSD hard drives. Currently, these devices are the most commonly used devices all around the world and the technology has provided us with a huge amount of storage devices in the smallest medium. Such as you can buy SD cards with up to 1 TB of storage.

Cloud Storage Space: The Outcome of this Evolution

The omnipresence of the Internet , but also the growing evolution of its performance over the past few years, have made it possible to democratize the fifth generation of storage means: online storage.

Online storage begins to take shape towards the end of the 20th century. However, it was during the 21st century that the cloud started to be accessible to the general public thanks to the progress of the Internet and technological innovations.

Online storage or the “Cloud” refers to the newest and most versatile storage medium available. On the other hand, the cloud is a service that allows us to store and transfer our data via the Internet. This operation does not require an external device. We can thus access our various files on our smartphone or our computer thanks to cloud platforms.

This technology offers various advantages that so-called traditional storage media cannot compete with. First of all, its price is cheaper than physical storage means. For good reason, you logically only pay for the size of storage memory chosen. To get an idea, at Apple, for example, you would have to pay the price of $10 to add 2 TB of online storage space for your device.

Another advantage to mention is its cross-platform nature. In other words, providers such as Microsoft with OneDrive offer access to files stored in the cloud via different devices (computers, smartphones, tablets, etc.) without compatibility problems.

However, the security of our cloud data remains one of the most significant controversies regarding this innovation. For more information on the security of this online storage medium, read an article that talks about it in much more detail: Is the cloud secure?

Myths and Realities of 5G

What is Refresh Rate and Touch Response in Smartphones

What is NFC Technology and How to Use It

How to Install an Electric Car Charging Station