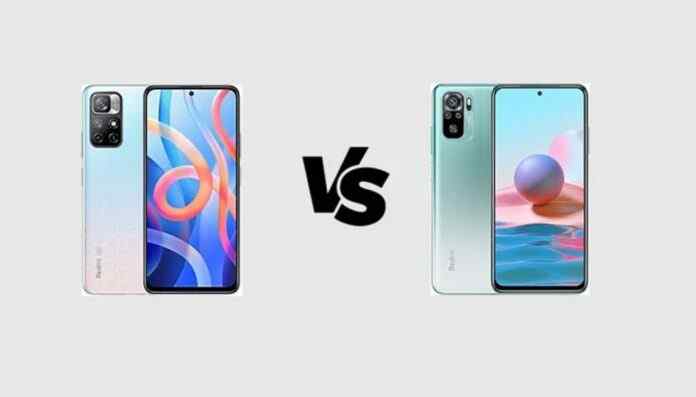 There are no impressive changes in terms of design between the Redmi Note 11 and its predecessor. Both phones have a back cover and a profile made of polycarbonate. There is an important difference in the camera module. Because the Redmi Note 11 has a larger and lesser amount of sensors. Also, the Redmi Note 10 is a more compact phone as it is thinner and lighter as well as has a smaller screen. Both phones are IP53 certified which makes them dust and splash-proof. In addition, their screens are protected by Corning Gorilla Glass.

More although an older model Redman in Note 10 has a better screen. It comes with a 6.43-inch Super AMOLED panel with a diagonal and Full HD+ resolution of 1080 x 2400 pixels. New Redman in Note 11, higher than 90 Hz refresh rate and the same Full HD + with a resolution but a panel IPS. In addition, Super AMOLED technology provides brighter colors and deeper blacks, resulting in better overall picture quality. By the way, note that the Redmi Note 10 has a smaller screen: 6.43 inches vs 6.6 inches. The fingerprint reader on both phones is mounted next to the power button.

Although it is a lower device when it comes to image quality, Redmi Note 11 has a much better hardware department thanks to its superior processor. We are also talking about the new MediaTek Dimensity 810 chipset, built at 6 nm and running at a frequency of 2.4 GHz. Unlike Snapdragon 678 found in Redmi Note 10, Dimensity 810 has 5G connectivity and even provides higher CPU and GPU performance.

Finally, there is more RAM with the Redmi Note 11. Also, the device comes with up to 8GB of RAM. The maximum amount of RAM provided by the Redmi Note 10 is limited to 6 GB. Redmi Note 11 and Redmi Note 10 are based on Android 11 but have different versions of Xiaomi’s Android customization: MIUI 12.5 and MIUI 12 respectively.

Redmi Note 11 only has two cameras on the back. We are talking about a 50 MP main sensor and an 8 MP ultra-wide camera. Also, the Redmi Note 10 has a total of four rear cameras: a 48MP main sensor, the same ultra-wide camera with 8MP resolution, and a pair of 2MP sensors for macros and depth calculation. Also, despite the lower camera count, the Redmi Note 11 takes better pictures in most scenarios thanks to its better main camera. Even the selfie camera is better on the Note 11: there is a 16 MP sensor that can take brighter photos with higher detail compared to the 13 MP front camera of the Note 10.

The battery of Note 11 and Note 10 comes with a 5000mAh capacity and a 33W quick charge. But despite this, the battery life is different as they have different components. Note 10’s AMOLED display has lower consumption, while Note 11’s Dimensity 810 is more efficient: so which device has the longest battery life? It mostly depends on usage. For example, while the Note 11 lasts longer in standby mode; Note 10 promises higher screen time.

The biggest difference between Redmi Note 10 and Redmi Note 11, which is among Xiaomi’s budget-friendly phones, starts with the camera. Although the Note 11 has fewer sensors, it promises better shooting quality. It also comes with a much better performance. On the other hand, the Redmi Note 10 is much more compact and has a much better display quality. Even the charging quality of both phones is the same. Still, the Note 10 is slightly cheaper than the Redmi Note 11. According to your needs, you can buy one of the two phones with peace of mind.