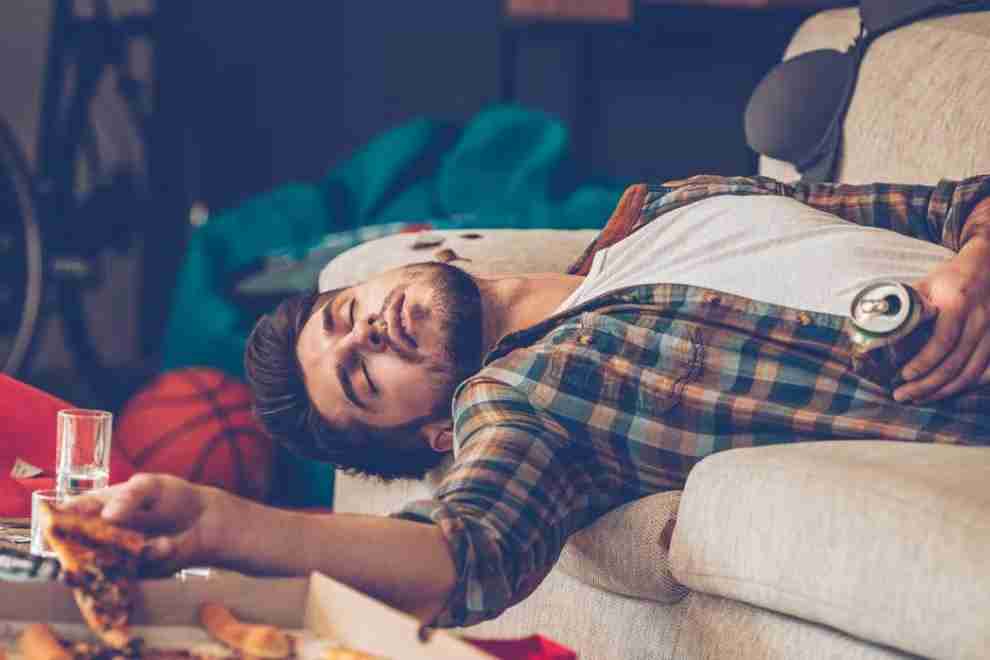 A hangover is the feeling of discomfort that alcohol consumption entails, which produces symptoms such as headache, nausea, irritability, or tiredness. Although it is not possible to say exactly how much alcohol causes a hangover, it is known that there is a correlation, that is, the greater the consumption, the greater the probability of the appearance of a hangover.

The causes of this discomfort are different, from dehydration, due to increased loss of fluids; increased level of toxic acetaldehyde; fragmentation of sleep, or intestinal irritation. Some remedies have been tried to try to reduce the symptoms associated with the sensation of a hangover, such as resting, drinking water or drinks rich in electrolytes to hydrate, or eating antioxidant foods.

Even so, no remedy has proven scientific efficacy. For this reason, the best action against a hangover is not to drink alcohol or to do so in a moderate and controlled way. In this article we will talk about a hangover, what symptoms are linked to this state, what causes it, and what remedies or actions we can take to reduce it.

What Do We Mean by Hangover?

We understand hangovers the feeling, symptoms, and signs that appear after alcohol consumption. The symptoms related to the hangover generate discomfort in the subject that can affect their functionality, that is, their normal performance is affected during the duration of the symptomatology. The feeling of discomfort usually lasts a day and its appearance will depend on the amount of alcohol.

Not every time you consume alcohol you will have a hangover, the probability increases the greater the amount consumed, although we cannot know exactly what amount is necessary, different variables such as the type of alcohol or the personal characteristics of the consumer influence. Regarding symptoms, the subject may show: tiredness, headache, weak, feeling thirsty, headache, muscle pain, nausea, vertigo, stomach pain, anxiety, irritability, and greater sensitivity to noise or light, among other symptoms.

This state of discomfort is usually linked to different causes such as dehydration, alcohol increases the urinary frequency and with it the loss of liquid; fragmented and less restful sleep; gastrointestinal irritation, due to increased release of acids; increased body inflammation; the appearance of acetaldehyde, a toxic by-product that produces inflammation of organs; sensation of withdrawal, with symptoms contrary to those produced during consumption.

How to Get Rid of a Hangover?

Having raised the symptoms that can be linked to a hangover and the causes that most frequently produce it, we can try some remedies that help reduce the symptoms and discomfort related to this state. We must point out that no remedy is effective, which means that no remedy assures us to reduce or remove the hangover. For this reason, the best remedy for not having a hangover is to drink in a controlled way.

As we have said, the amount of alcohol is directly correlated with the symptoms of a hangover. For this reason, if we reduce the amount of alcohol consumed, it is less likely to have a hangover. Likewise, the variable that has shown the greatest influence and efficacy in reducing hangovers is time, in other words, after a few hours, normally 24 hours, the body recovers and the discomfort decreases without the need for intervention. Let’s see what steps or ways that can be useful to reduce the discomfort associated with a hangover.

12 Steps to Cure or Reduce Hangover

To try to avoid or reduce a hangover, we can try to act preventively, that is, ensuring that the symptoms do not appear. Drink slowly, slowly, to have more control and be able to notice when the alcohol is taking effect and we don’t need to drink more.

It is recommended, before starting to consume, to set the amount that you are going to drink, for example, two beers, in this way it is more likely to be able to maintain control. Likewise, another factor to take into account is eating before drinking, that is, do not start consuming on an empty stomach, since in this way the effect may be greater.

As we saw, one of the causes of a hangover is dehydration or fluid loss, therefore we must increase our water consumption to try to counteract the effect. It is recommended to drink water while we are consuming alcohol, in this way we will recover the lost liquid and reduce dehydration. Similarly, drinking water during alcohol consumption also helps reduce the amount of alcohol consumed.

To hydrate ourselves, another strategy consists of drinking isotonic drinks, the ones that athletes usually drink, since they show a higher level of salts and potassium, thus helping to recover optimal body levels.

As we have mentioned, a symptom linked to a hangover is tiredness and sleep disturbance, which is more fragmented. For this reason, sleep helps reduce the feeling of discomfort and helps the body recover. As we know, time is the variable that is most related to the reduction of hangovers, when we sleep, time passes faster. Since our functioning is also affected, we can feel slower and more difficult to do tasks, trying to sleep and taking the opportunity to rest may be the best option to get over a hangover.

We have already said that there is no need to perform any intervention or take medication to reduce a hangover. But if the headache, the discomfort produced, is very intense and it becomes difficult for us to bear it, we can take a medication, but we must know which drugs we can take and which ones are better to avoid. It is not recommended to take any medicine that contains paracetamol, since it causes liver damage, that is, in the liver, if it interacts with alcohol.

If you need a medication to relieve symptoms, it is better to opt for ibuprofen, since its anti-inflammatory effect helps reduce discomfort and it is not as harmful to the liver.

This recommendation is also before consumption or during consumption. We must try to avoid alcoholic beverages rich in congeners, which are toxic substances such as ketones, methanol, or the aforementioned acetaldehyde, which increase the probability of the appearance of a hangover. These drinks high in these components are whiskey, tequila, or cognac.

Coffee is a diuretic, which means that it increases fluid loss. For this reason, given that, as we have seen, hangovers are linked to dehydration, it is recommended to avoid coffee consumption and try to drink water or other types of beverages such as juices or broth.

It can also help to take a good shower. Showers have been found to help you loosen up, feel cleaner, relax your muscles, and relieve headaches. The pressure of the water jet and the vapors will help you feel better and thus be able to face the day better.

It has been observed that alcohol consumption produces oxidative stress, which translates into an increase in free radicals linked to the appearance of diseases such as cancer or heart problems. In this way, eating foods that act as antioxidants, and help reduce the adverse effects of alcohol, can be favorable. Some of these foods are fruits such as cherries, grapes, or pomegranates; carrots; spinach; pure chocolate, or dried fruit such as walnuts.

Linked to the previous point, with antioxidant foods, it is recommended to drink black, green, or red tea. This can be a good alternative to coffee consumption, since it can also act as a stimulant, helping us to activate, and feel more energetic, but without the diuretic effects that coffee shows, as we have mentioned.

Eating breakfast, and eating something when we wake up, can help regulate blood sugar levels. The body, by breaking down alcohol, generates lactic acid as a product, which in turn produces a reduction in glucose levels, and sugar, linked to hangover symptoms. It is not known precisely which foods are the most recommended, but we will try to eat those that we have mentioned as antioxidants and healthy foods since they provide vitamins and minerals that help restore the state of the body.

This point serves as a summary. The remedies mentioned may be helpful but none have proven scientific efficacy. On the other hand, we know what effects alcohol consumption has, and more so the excessive consumption that is usually linked to a hangover, what it does to our body, and how it damages it. In this way, it is recommended not to consume alcohol or to do so moderately, in low quantities. Alcohol is a drug and as such it alters our nervous system, it can create addiction and all the symptoms that this entails.

Read More: What Alternative Options Do You Have to Cure Chronic Injuries