Samsung recently launched its new Galaxy A-Series A32 5G smartphone that comes with AMOLED Display, 90Hz Refresh Rate, Quad Camera Setup, and 5000mAh battery with 15W fast charging. However, performance is a weak point of the Samsung Galaxy A32 relative to the competition. There are better processors in this price segment than the MediaTek Helio G80. But the display here is amazing, the cameras are very good, and the 5000mAh battery lasts for a long time.

The packaging in which the Galaxy A32 comes in is quite familiar – a simple cardboard box on which the image of the smartphone is printed and the model is indicated. The content is also familiar – a 15W adaptive fast charger and a USB-C cable.

You won’t find a headset here either, although the phone has a 3.5mm jack where you can plug in wired headphones. 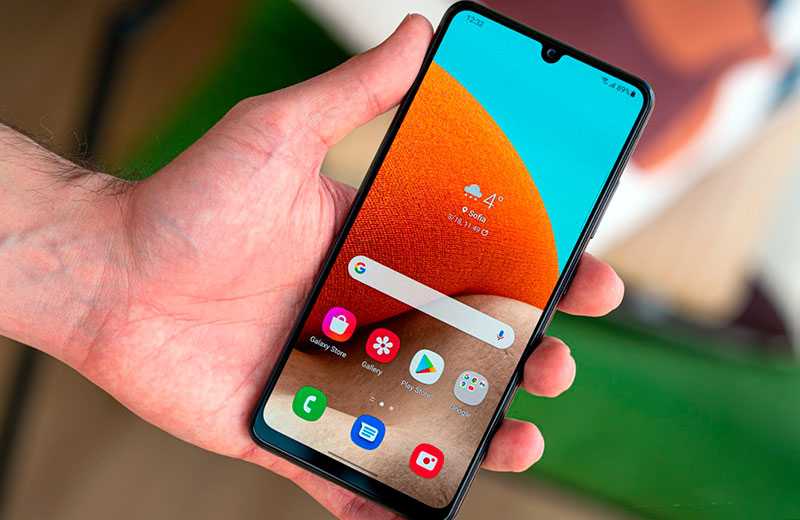 The appearance of the Samsung Galaxy A32 is rather unusual, especially for the cameras – three sensors are located separately from each other and protrude above the rear panel. Their arrangement resembles their elder brothers in the line – A52 and A72, only the cameras are not united by a separate module.

The body has several colors: black, white, blue, and purple. The first one looks pretty boring, although if you don’t like bright designs this is the option for you. The back is made of plastic, not Gorilla Glass 5. Although the body has become lighter, fingerprints are quite noticeable on it.

The side frames are also plastic, on the right are the power and volume buttons, which have already become the standard for Galaxy smartphones. On the left – there is a slot for two nano-SIM cards and one microSD. On the underside, you’ll find a USB-C port, headphone jack, speaker, and main microphone, while the secondary microphone is at the top.

The front panel is a 6.4-inch Infinity-U display, where the letter U stands for the cutout shape for the front camera. The bezels around the screen are not small, although, on the other hand, there will be much fewer accidental clicks during use.

Thanks to AMOLED technology, the Galaxy A32’s fingerprint scanner is located under the screen. It’s optical, not ultrasonic like on Samsung’s flagships. It works mediocre, as it is not very fast and often makes mistakes.

Screen with a frequency of 90 Hz 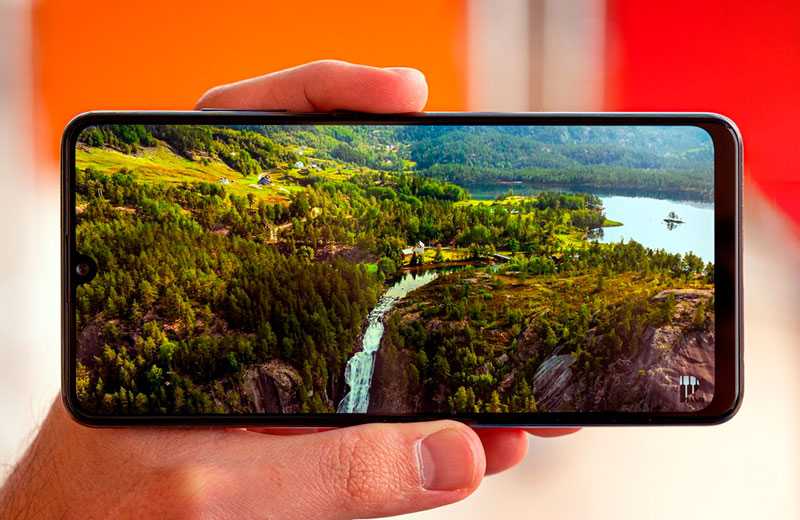 The Samsung Galaxy A32 is equipped with an excellent 2400 x 1080 Super-AMOLED sensor. More importantly, the screen has a refresh rate of 90Hz, unlike the 5G version.

This is one of the best displays in the Galaxy A lineup, with a maximum brightness of 814nits in Adaptive Mode. If you move the slider by hand, it rises to 400 nits, which is a perfectly acceptable figure. Since it is an AMOLED panel, blacks are very deep and the contrast is excellent. At the same time, the minimum brightness is a comfortable 1.8 nits.

The color modes in the Galaxy A32 are the same as most other smartphones from Samsung. There is a Saturated and Natural profile. The first one covers the widest possible color range, the second one covers the sRGB space. At the same time, the hue slider for the Saturated profile allows you to almost completely remove blue colors.

Since the display has a refresh rate of 90 Hz, you can choose between maximum frequency and 60 Hz. In the model with a maximum frequency of 90 Hz, it will be almost everywhere – except for applications that require it to be reduced, such as a camera or Google Maps. 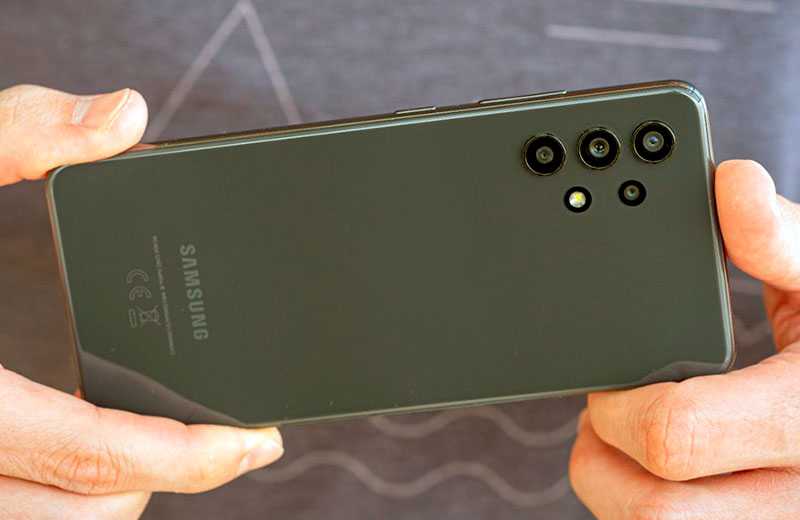 On the back of the Samsung Galaxy A32, you’ll find a traditional quad camera set. As usual, two of them are full-fledged, the other two were added more for advertising purposes. At least the macro camera and the depth sensor have a resolution of 5 MP, not 2 MP.

The main sensor is a 64MP Samsung GW3, uses the usual pixel binning, so the default image resolution is 16MP. The 8MP ultra-wide-angle lens is somewhere between the quality of the A12 (5MP) and the A52 (13MP). Its viewing angle is 123 degrees, there is no software distortion correction. A 20MP front camera is installed in front for selfies.

The daylight performance of the main lens is good. The 16-megapixel photos retain enough detail, there is almost no noise, which is unusual for Samsung cameras. The colors are not as bright as usual, although they cannot be called pale. You won’t find HDR in 64MP mode, and details don’t seem to be higher when noise becomes visible. With at least 2x digital zoom, the quality is clearly better.

The ultra wide-angle sensor has no distortion correction. On the one hand, this will create unpleasant effects at the edges of the image, on the other, more objects will fit into the frame. Be that as it may, I would like to be able to use the correction here, with the help of additional. settings.

Low-light photos from Samsung Galaxy A32 cameras are not impressive. They are too soft and noisy when the dynamic range is small. A lot of detail is lost in the shadows, and night mode does not solve this problem. In addition, it takes too long to save captured images.

But the 5-megapixel macro camera takes some of the best close-up shots in this segment. This is due to the higher resolution of the relatively usual 2-megapixel, although the sensor does not have autofocus.

Despite the 20MP resolution, the front camera retains 12MP results. The colors are pleasant, but the skin tones are unusually warm for Samsung. Yes, we also have a full 20MP mode, but HDR is not.

The budget Galaxy A series smartphones do not support 4K video – you have to buy at least the A52 for that. The Galaxy A32 has a maximum recording quality of 1080p / 30 fps, however, I am glad that there is electronic stabilization.

The quality of the main camera at 1080p is almost the same as the Galaxy A12, and this is not a compliment at all. The picture looks too sharp, the detail is low, although the tints look quite natural. 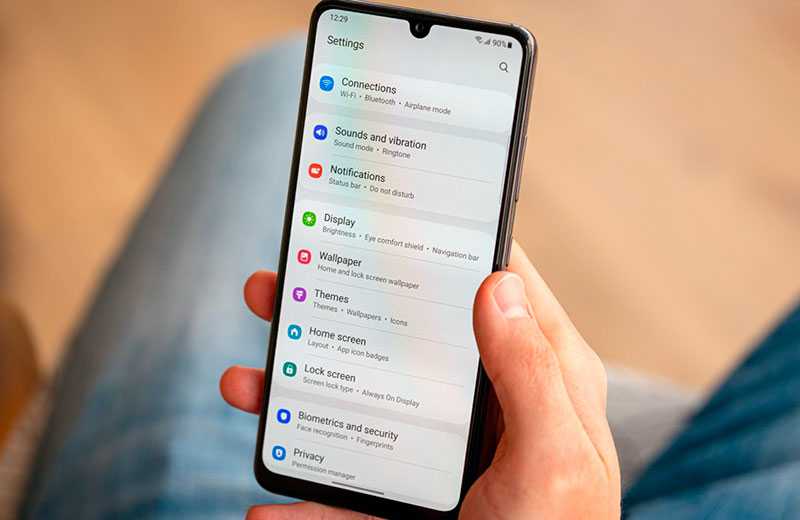 The Samsung Galaxy A32 runs on Android 11 with One UI 3.1. Like most of the company’s latest smartphones, the A32 will receive three major system updates and four years of security updates. Most likely, the owners of this gadget will see Android 14 in 2023.

One UI 3.1 differs little from previous versions. There is a “digital wellbeing” widget on the lock screen, when unlocking here is done through a fingerprint scanner or face recognition. The first method is more reliable because face recognition works with the front camera.

We also have all the important additions from Android 11. Among them: notification history, a new type of notifications (Bubbles), and convenient playback control. In the “Share” menu, you can choose the applications you want and pin them to the top of the list.

The settings interface has become nicer, and Google has worked on granting app permissions. Now you yourself control the whole process, every time you start a particular program. Almost all of Samsung’s new features are here, too, including the Edge panel, Bixby voice assistant, and SmartThings integration. Unfortunately, you won’t get the option to use Dex mode, but the Quick Link Windows feature is available instead. 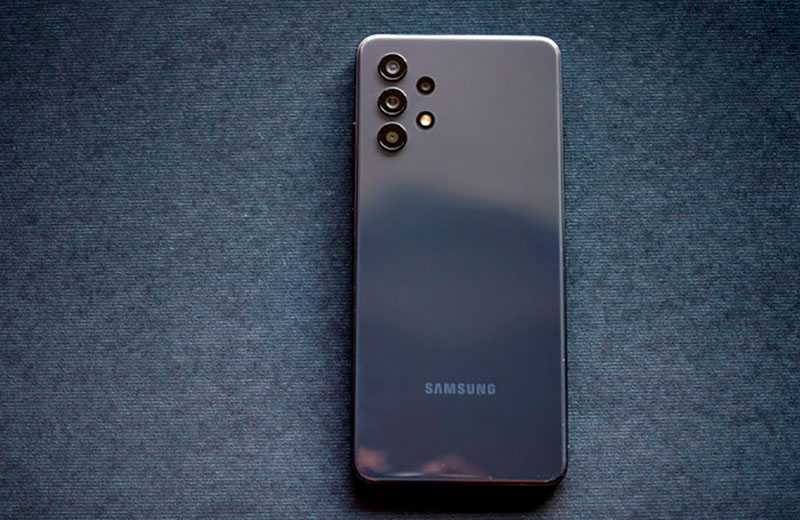 The performance in the Samsung Galaxy A32 is handled by the MediaTek Helio G80 processor. It is not bad, but noticeably inferior to many competitors, even in the price segment. This octa-core chipset is assisted by a Mali-G52 MC2 GPU, 4/6/8 GB of RAM with 64/128 GB of internal storage.

Dual 2.0 GHz Cortex-A75 cores are designed to handle the toughest operations. But, most smartphones in this segment have the newer A76 cores, which are faster. Benchmarks show disappointing results, with the A32 reaching just 1277 points in GeekBench 5 multi-core mode. This is no match for competitors on the Snapdragon 720 or Density 800.

The graphics core does not do its job very well here either. In the GFX Manhattan ES 3.1 (offscreen 1080p) test, the Samsung device produces only 15 fps, which is two times worse than some competitors.

In general, iron is the weak side of the Galaxy A32, however, this phone cannot be called slow, in many situations, the frequency of 90 Hz helps out. Sometimes the device lags a little, especially during the unlocking, and with a more powerful processor, the A32 would be a much more attractive choice. 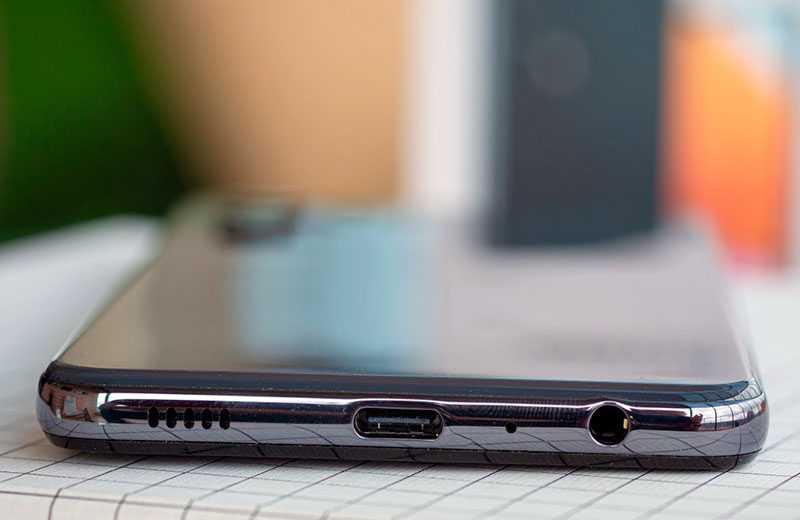 Like most non-flagships from Samsung, the Galaxy A32 has only a single downward-facing speaker on the bottom edge.

It is quite quiet, almost all competitors give out more decibels, and some even have stereo speakers. The quality is mediocre, although not terrible in general, and it is enough for watching videos.

The sound quality of the connected wired headphones is noticeably better than that of the speaker, so we advise you to use this method. 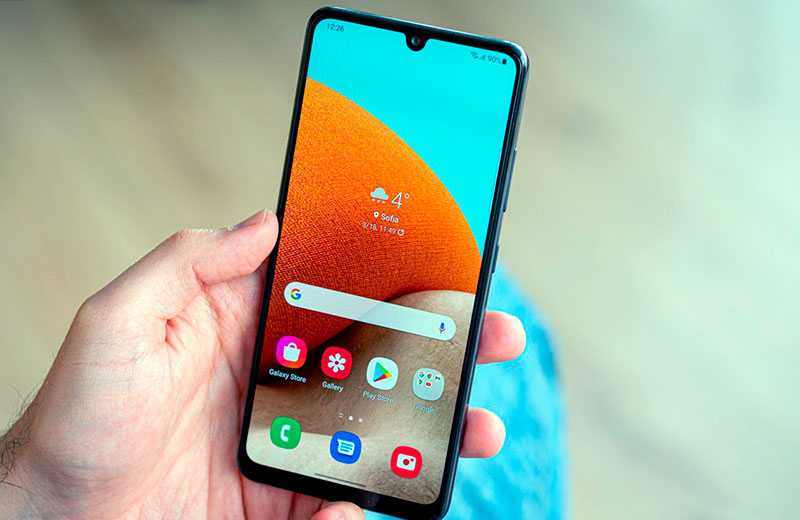 Inside the Samsung Galaxy A32 is a 5000 mAh battery. This is already quite a familiar figure for the middle segment, and 5000 mAh is needed here – a Full HD screen with 90 Hz requires more power.

However, the A32 performs excellently in battery life tests. With 90 Hz, the smartphone has enough energy for 16 hours of web surfing or 18 hours of watching videos. In 60 Hz mode, you will have an additional hour or two of work. But, it is hardly worth sacrificing the smoothness of animations and interfaces for this.

In the box with the Galaxy A32, we get an outdated 15W Adaptive Charging adapter from Samsung. Why outdated? Because this technology is already 6-7 years old, and it takes 2 hours and 20 minutes to fully restore the battery energy. 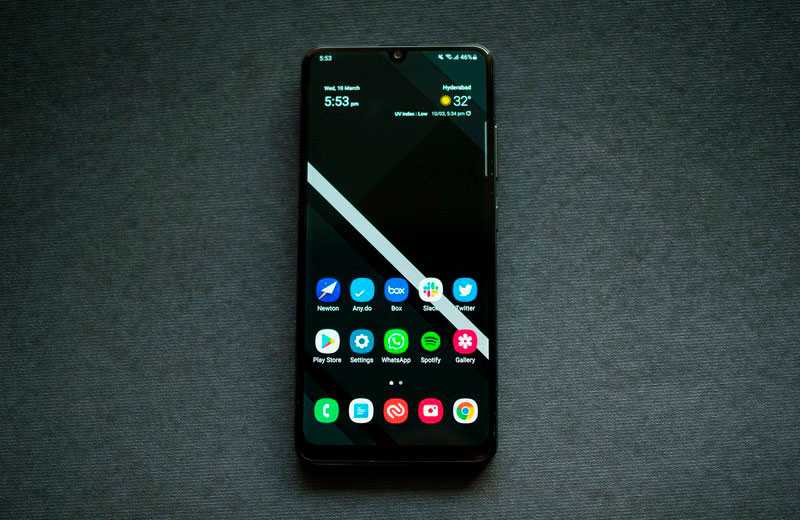 Concluding the review, we came to the end that despite good specs in some aspects, the new Samsung Galaxy A32 smartphone has too many reservations. The main one is the processor, which is already slow for this price segment. The same goes for the quality of shooting, which is far from outstanding – especially for video.