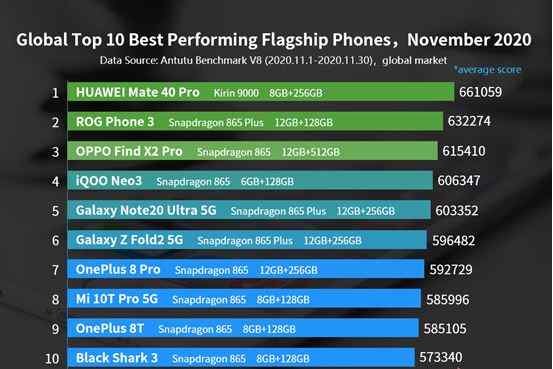 Like every month, the benchmark publisher AnTuTu publishes its ranking of the top 10 most powerful smartphones of November and December 2020. For this December top 10 on smartphones for the month of November, there are no less than 9 devices equipped with Qualcomm chips while the No. 1 place is taken by the Huawei Mate 40 Pro and its Kirin 9000 SoC.

Don’t waste time looking for AnTuTu on the Play Store. The publisher of these applications had some trouble with Google and the benchmark was removed from the Google market place. If you want to install it, go to the official website: don’t take any risks.

Like last month, the Huawei Mate 40 Pro stands out as the most powerful smartphone around. But beware, this very beautiful camera, gifted in photography, is also not recommended. Because of US trade sanctions, the latter does not embed any Google applications: no Gmail, Google Maps, YouTube, etc.

Afterward, the device is indeed a racing beast with its Soc Kirin 9000 which is the first of its type to be engraved in 5 nm (the smaller it is, the more “transistors” can be fitted per mm²). Behind the only device in this ranking equipped with a HiSilicon chip, we find the very powerful Asus ROG Phone 3 with its Qualcomm Snapdragon 865 Plus SoC and the Oppo Find X2 Pro. A device unknown to us takes fourth place while two Samsungs are just behind.

Note that the Samsung Galaxy Note20 Ultra 5G in this top 10 is the model equipped with an American chip and not the one marketed with us, based on Exynos 990. This is why our Galaxy Note20 Ultra lent by the Korean brand peaks at 521,897 points: it would therefore not even be in this ranking.

Note also the presence of the OnePlus 8 Pro and 8T in 7th and 9th place with a solid Xiaomi Mi 10T between the two. The other “gaming” smartphone in this ranking, the Black Shark 3 brings up the rear with a very respectable score.

8 Best Rihanna Perfumes For Women in 2021

ABOUT US
Topandtrending.com is one of the fastest-growing websites. Top and trending is your news, entertainment, top 10 best, music, fashion, sports, tech, games, mobile site. We provide you with the latest news from around the world.
Contact us: topandtrendingofficial@gmail.com
FOLLOW US
© 2020. Developed with ❤️ by team Top and Trending
MORE STORIES
Smartphones