Home Crypto What are Meme Coins and How Do They Work? 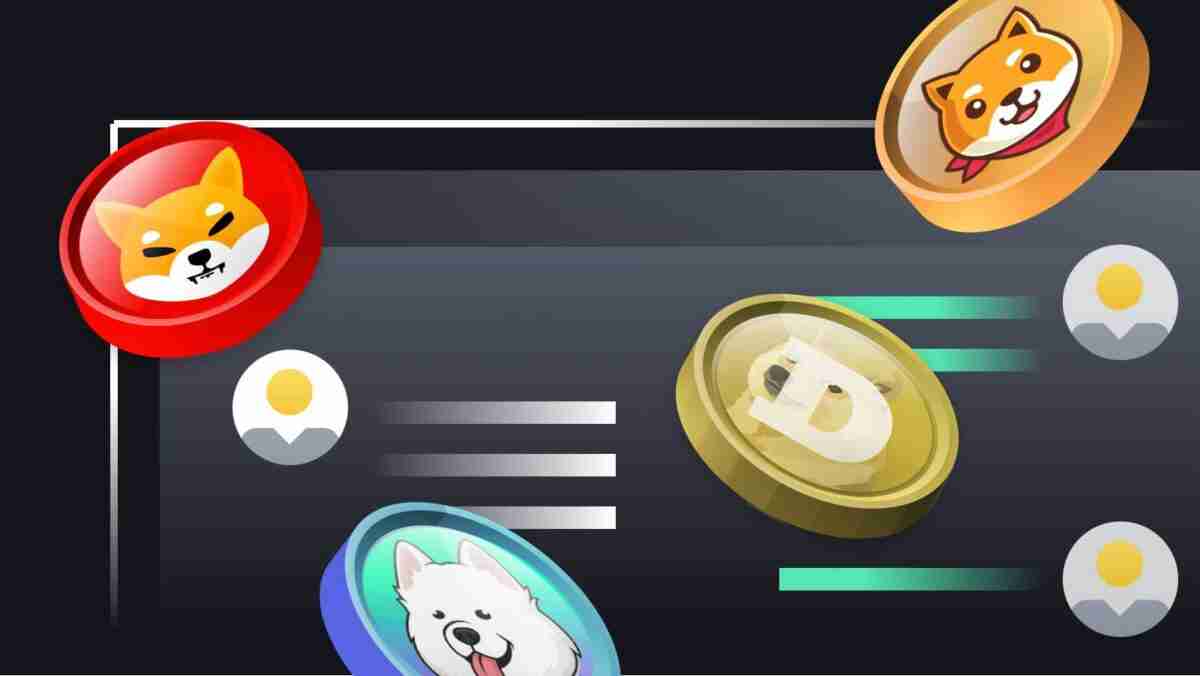 What Are Meme Coins?

Dogecoin (DOGE) was the first meme coin to be created. Released in 2013 as a parody, it was inspired by the popular meme Doge, a Japanese Shiba Inu dog. As already mentioned, meme coins are generally very volatile and meme coins projects are mainly geared towards the community.

This means they can gain popularity overnight, depending on the behavior of the online community and FOMO. However, the price can also unexpectedly drop as traders turn their attention to new meme coin projects.

Another characteristic of meme coins is that they tend to have a huge supply or even an unlimited supply. For example, Shiba Inu (SHIB) has a total supply of 1 quadrillion tokens. DOGE does not have a maximum supply and by the end of 2021, it had more than 100 billion tokens in circulation. As meme tokens generally lack coin “burning” mechanisms, the huge supply explains the relatively low prices. With just 1 dollar, you can buy millions of meme tokens.

Why Are Meme Coins So Popular?

It is difficult to pin down specific reasons, but some say that during the COVID-19 pandemic, the cryptocurrency market grew as individual investors wanted to protect themselves from inflation. Meme coins also grew due to “hype” in both market capitalization and variety.

It all started with the saga of GameStop (GME) and AMC Entertainment (AMC) at the end of 2020, where the Reddit community managed to raise the prices of these shares by up to 100 times in a few months.

In January 2021, a Reddit group joked about raising the price of DOGE to create a crypto-equivalent version of GME. The trend caught on and, influenced by Tesla CEO Elon Musk’s tweets, the price of DOGE soared. Dogecoin hit a new all-time high of $0.73, up more than 2,000% in five days.

However, in May 2021, Elon Musk publicly joked about DOGE on TV and many say it was the cause of the subsequent price drop. So, several traders turned their attention to other meme coins, such as SHIB, also known as “ Dogecoin killer ”. At the same time, there was a feeling of FOMO among small investors towards meme coins, where many had hoped to become millionaires overnight. And that spawned another rally for meme coins.

Another reason small investors find meme coins attractive is that they typically only cost a few cents or even a fraction of a cent. Technically, the low price doesn’t mean much, because these coins have huge supply values.

Still, the feeling of holding millions of units of a meme coin is different when compared to a fraction of ETH or BTC. With just a few dollars, you can get thousands or even millions of DOGE, SHIB, or Akita Inu (AKITA) tokens.

In addition to potential profits, the meme coin frenzy is also driven by community sentiments. As we mentioned, meme coins are inspired by popular internet memes, intended to be fun, and sometimes considered an “inside joke” for a given community.

Meme coins grew exponentially in 2021, but as with all cryptocurrencies, trading and investing in meme coins carries high financial risks.

First, the economics (tokenomics) of meme coins can be worrying. Take Bitcoin as an example. It has its blockchain, a well-written whitepaper, an established ecosystem, and a deflationary nature. Furthermore, we have seen greater institutional adoption of Bitcoin in recent years.

When compared to BTC, most meme coins are inflationary and do not have a maximum supply. Their ecosystems, use cases, and fundamentals are often defined by collective jokes from the community.

Only a few meme coins were developed with technology similar to that of major cryptocurrencies. For example, DOGE’s technology was derived from Litecoin (LTC) and SHIB was developed on the Ethereum blockchain.

Another potential risk is that meme coins are community-driven and have a higher speculative degree than cryptocurrencies with higher market capitalization. This volatility generates large unexpected highs and lows ( pump and dump ).

The “useful life” of meme coins is usually short-lived. Its prices can skyrocket with celebrity influence or FOMO, or drop unexpectedly when the community shifts its focus to another meme currency.

As the meme coin market continues to grow, projects emerge that try to take advantage of the “hype” to scam traders. So be careful! For example, Squid Game (SQUID), a meme coin inspired by the popular Netflix series, grew by over 86,000% in one week.

However, the development team applied the so-called rug-pull and the price suddenly dropped by 99%. The worst thing is that the holders were not allowed to sell their SQUID tokens. Therefore, we need to be very careful and carry out our research ( DYOR ) before making trades or investing in meme coins.

The Most Popular Meme Coins

Leading the meme coin market with the highest market capitalization is Dogecoin (DOGE) and Shiba Inu (SHIB). After the success of DOGE and SHIB, a large number of dog-themed meme coins appeared on the market and the tokens stood out in the second half of 2021. Here are the main ones:

Dogecoin (DOGE) was created in 2013 by software engineers Billy Markus and Jackson Palmer. It was inspired by the meme of a Shiba Inu dog and was intended to be a joke cryptocurrency to attract public attention. As a “fork” of Litecoin (LTC), DOGE adopts the same Proof of Work (PoW) mechanism and does not have a maximum supply.

The Shiba Inu (SHIB) is DOGE’s rival and is often nicknamed the “Dogecoin killer”. The SHIB is also named after a Japanese dog breed. It was created by an anonymous developer nicknamed Ryoshi in August 2020. The main difference between DOGE and SHIB is that they have a limited supply of 1 quadrillion tokens, 50% of which were “burned” or donated to charity institutions. charity. The SHIB ecosystem also includes a decentralized exchange (DEX), an NFT art incubator, NFTs, and an  NFT game.

Donelon Mars (ELON) closely follows the canine duo in terms of popularity. As the name suggests, the ELON token references Tesla CEO Elon Musk and his company SpaceX. ELON was the result of a Dogecoin fork and has an outstanding supply of 557 billion tokens. ELON’s value is up over 3,780% since its launch in April 2021.

Many other meme coins use Japanese dog breeds as pets, such as Akita Inu (AKITA), Kishu Inu (KISHU), and Floki Inu (FLOKI). AKITA was inspired by DOGE. It was launched on Uniswap as an ERC-20 token in February 2021. Its economic characteristics ( tokenomics) are very similar to those of SHIB. As SHIB creator Ryoshi did, the AKITA team locked 50% of their total supply on Uniswap and the remaining 50% was sent to Ethereum co-founder Vitalik Buterin.

However, AKITA has a total supply of 100 billion tokens, which is 10 times smaller than the total supply of SHIB. In May 2021, AKITA and other dog-themed coins gained traction. The coin was already seen by some community members as yet another “Dogecoin killer”.

Samoyedcoin (SAMO) is a dog meme coin project built on the Solana blockchain. At launch, 13% of the SAMO supply was distributed to community members. According to the website, the SAMO roadmap includes burn events, airdrop tools, a decentralized exchange (DEX), and the creation of NFTs.

Kishu Inu (KISHU), another dog-themed coin meme, has grown exponentially since its release in April 2021. It includes participation rewards for active users, non-fungible tokens (NFTs), and a DEX called Kishu Swap. Its popularity has been increasing. The token has already registered more than 100,000 holders and had a market capitalization of 2 billion USD within a month of its launch.

Another newcomer to the list of meme coins that capitalized on the bull market is SafeMoon (SAFEMOON). It is a BEP-20 token launched on Binance Smart Chain (BSC) in March 2021. SAFEMOON encourages long-term holding by applying penalties to users who sell the token, with an exit fee of 10%.

Half of the fees are distributed to existing SAFEMOON holders and the other half will be burned. It attracted the attention of retail investors after its price soared in April. As of November 2021, SAFEMOON’s ROI is up 9418.54% according to CoinMarketCap.

How to Buy Meme Coins On Binance?

You can buy the most popular meme coins like DOGE and SHIB on cryptocurrency exchanges like Binance. For other less notable meme coins, you can use decentralized exchanges/brokers.

We’ll use DOGE as an example.

With the emergence of new meme coins on the market, many traders are expecting to make profits as happened with DOGE and SHIB. However, it is important to do your research ( DYOR ) before committing to any meme coin project.

Where To Go for Hair Treatments in Europe