The wait is over now, the seventh edition of the ICC Men’s T20 World Cup 2021 Live Streaming is scheduled to begin on October 17th – November 14th, 2021. Where every T20 event tournament in the past has its thrilling and tragic moments, similarly, in every tournament, the cricket boards announce new team jerseys and kits for T20 World Cup.

Indian jerseys are known for their blue colors, so for the upcoming T20 World Cup tournament, India unveil their New Team Jersey Kit “Billion Cheers Jersey” with Blue and orange color mixtures along with the beautiful pattern design. BYJU’s will be their official sponsor along with the MPL fantasy league and on the right chest, the ICC T20 World Cup logo is printed.

Mighty India, one of the hot favorites teams in the shortest format of cricket is led by Virat Kohli. The legendary captain of Indian cricket, MS Dhoni will be the team mentor for the tournament. 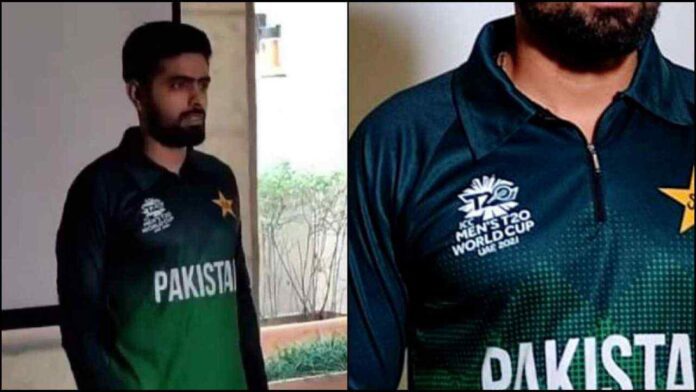 Green Pakistan, PCB revealed their new Jersey Kit for the upcoming T20 World Cup tournament. On the right chest, the Twenty20 World Cup logo is printed white on the left chest, the Star Sign representing Pakistan is printed. The dark green color with dotted checkboxes and the light green color below the Shirt makes the Kit looks marvelous.

The team with the most unpredictable wins and loses in the shortest format of cricket. Where Pakistan was still confused announcing their final squad for the T20 World Cup, Thank God, they reveal their official New Team Jersey Kit for the tournament. Although the controversy started after their kit was revealed as in the leaked photo instead of T20 World Cup 2021 India, they printed T20 World Cup 2021 Oman & UAE logo which caused the controversy. ICC might take action against them and they might get fined for doing that. 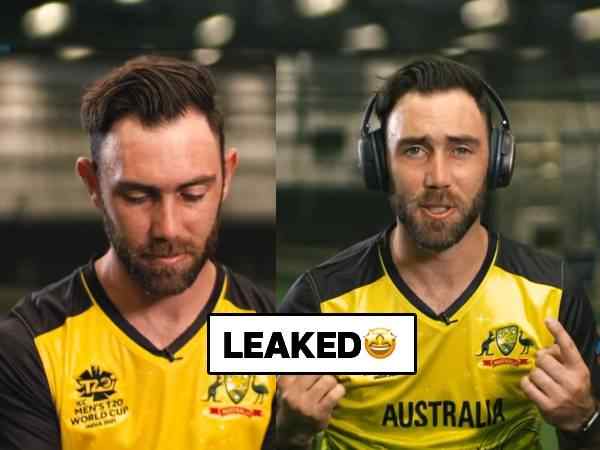 The yellow color represents Aussies, and without any doubt, Aussies bring so many changes in international cricket. Looking at Australia’s Jersey for the upcoming tournament, the Cricket Australia logo is printed on the left chest while on the right chest there the Tournament’s logo printed.

Although the Australian cricket team was one of the strongest teams ever in cricket history for decades, now they seem weak. Lost few series against minor teams damaged their morale. Hope so, they will make a strong comeback in the upcoming tournament and add another trophy to their mighty drawer of the International Trophies list. 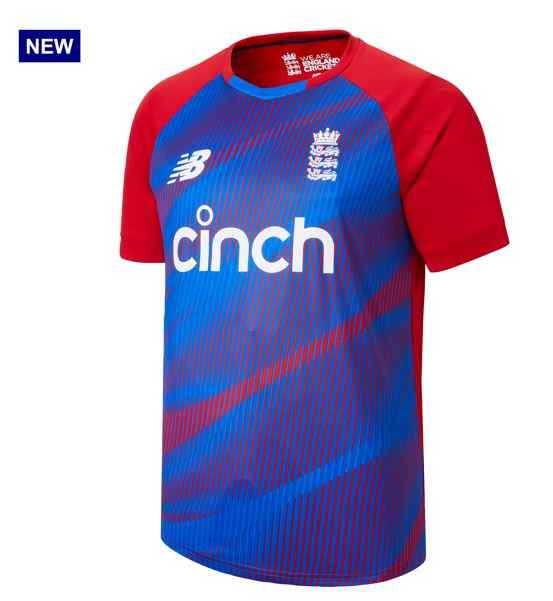 The combination of Red and Blue, the new kit, and the jersey of England contains the beautiful mixed texture of red and blue color. On the right chest, the ECB logo is printed while on the left chest, the  ICC T20 World Cup event logo is printed. Cinch is the official sponsor for the team jersey which is printed in the middle of the shirt.

One of the most promising teams in recent times winning the ICC Cricket World Cup 2019, the England team who had scars of losing the last edition t20 world cup will take their revenge for sure. Back in 2016, West Indies snatched the victory from England in the last over, which England will never forget until they win the tournament. 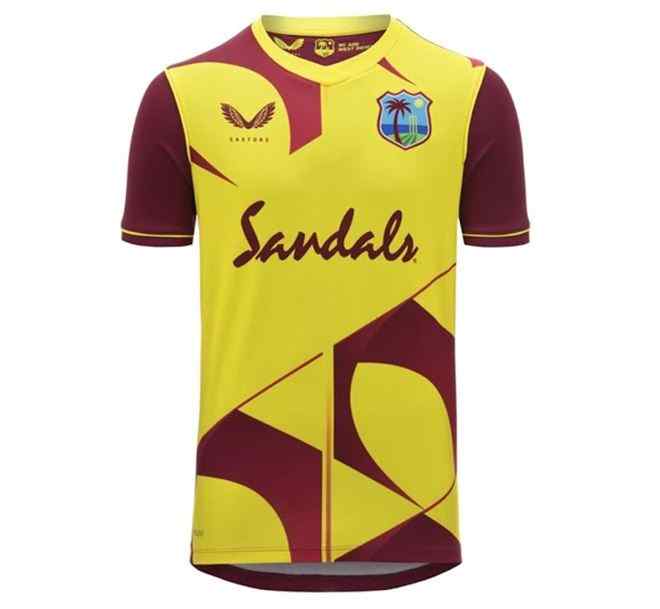 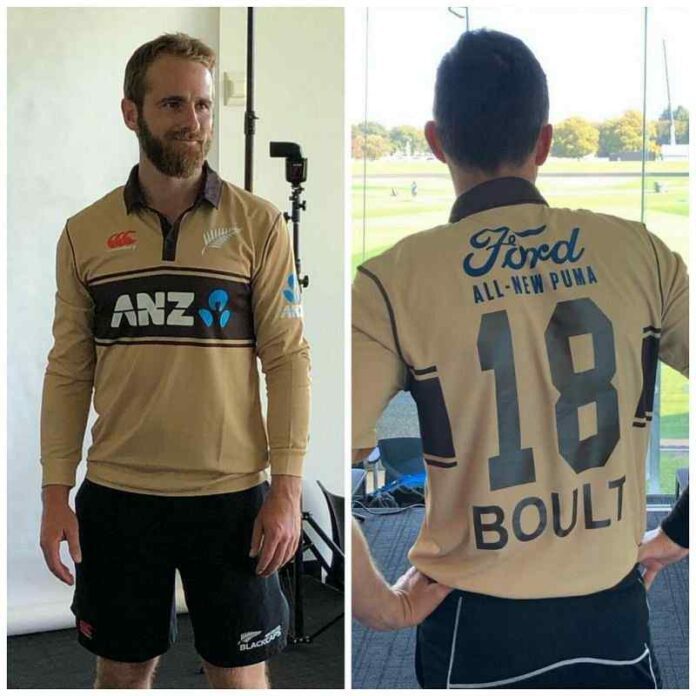 Black Caps, the name shows their kits and jersey which they wear for decades. Black color is the representation of New Zealand in the cricket world, but this time they made a unique addition to their Jersey for the upcoming t20 world cup 2021 tournament.

One of the unluckiest teams in all formats of games will be looking straight up with the new mind to win the trophy for their country. New Zealand who never won the t20 trophy, will try to become the champion. Kiwis although won the first edition of the ICC Test Championship tournament which was a great achievement for their country. 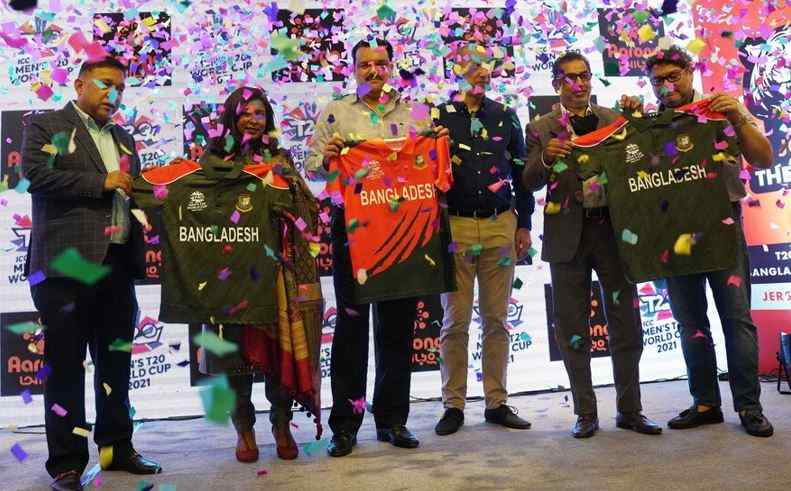 The Bangladesh Cricket Board has unveiled the new T20 World Cup jersey as the new kit is dark green and red, with all-green trousers. It has a giant Daraz logo on the right chest and sponsors on the sleeves. The Bangladesh national flag is on the left, while the country name is in bold in the center which looks decently styled. 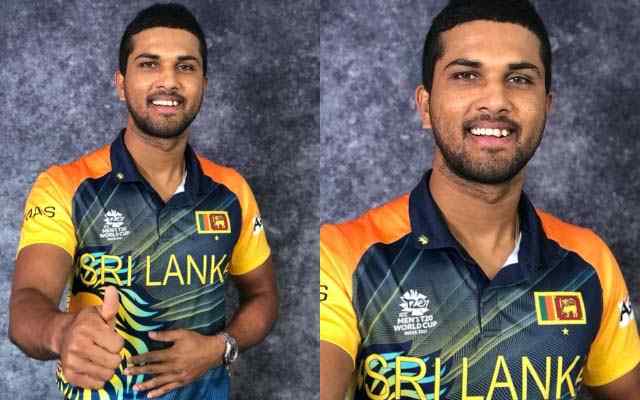 In T20 matches, Sri Lanka utilizes a dark blue shirt with orange, green, and brown highlights. The Sri Lankan new jersey may not be appealing to most viewers; the New Sri Lankan outfit features a national flag on the left sleeve and the MAS logo on the right. The country name is boldly emblazoned in the shirt’s center. 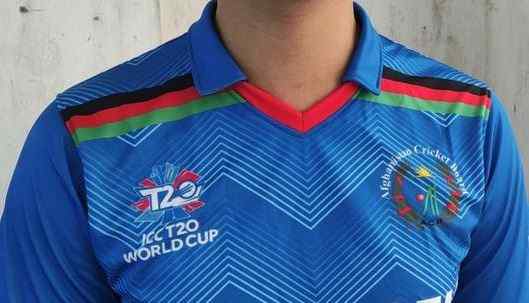 One of the emerging teams in T20I, Afghanistan is ready to upset any big team in the tournament. With semi blue color jersey, the Afghanistan board unveil their new Jersey Kit for the upcoming tweny20 world cup tournament. The new kit contains Red, Blue, and White combination that makes their jersey look wonderful and amazing. The T20 world cup 2021 India Logo is printed on the right chest while Afghanistan Cricket Board Logo is printed on the left chest. 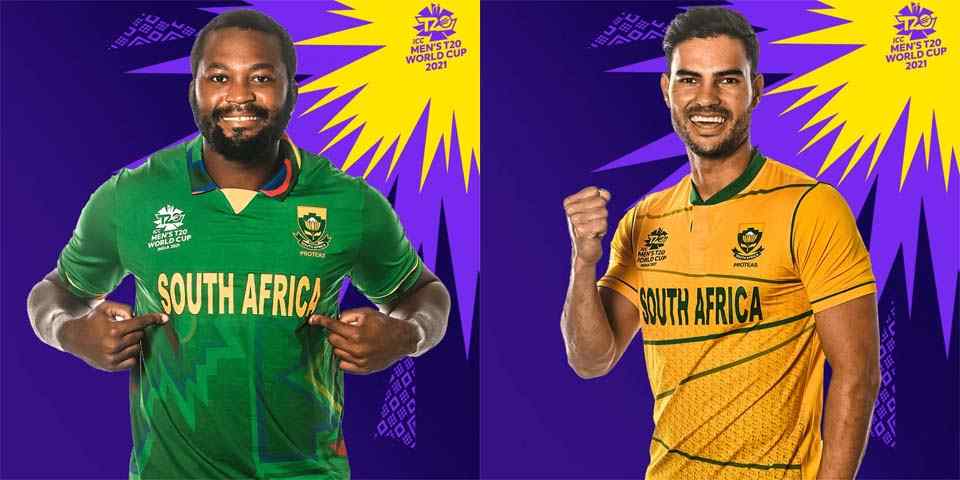 One of the unluckiest teams in cricket history who fought hard but always get choked in do-or-die situations. With their new strength of young talent, they would try their best to wash the stain of getting chocked in every event. But without Abd Villiers, the team will struggle a bit as he retired from international cricket.

In T20Is, the Proteas traditionally use yellow jerseys with green stripes. The New South Africa Jersey is yellow and green with a Cricket South Africa emblem on the top left and the country name in bold letters in the center. But the jersey is unappealing. Still, it is built of robust material to supply energy to the athletes during rigorous stadium games. 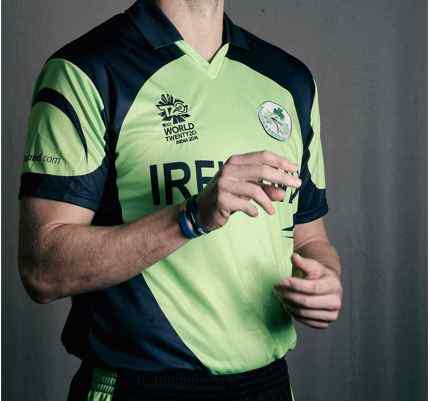 In anticipation of the T20 World Cup 2021 starting on October 17, the Ireland Cricket Board has unveiled a new jersey for the Irish team. On October 18, Ireland will face the Netherlands in Oman. The Ireland team kit 2021 is one of the most stylish outfits in the T20 World Cup. Stunning color combination for viewers; Irish Flag appears on the right side of the jersey, and the T20 World Cup emblem is on the left. The blue and white striped Ireland New Outfit trousers add to the beauty of the kit. 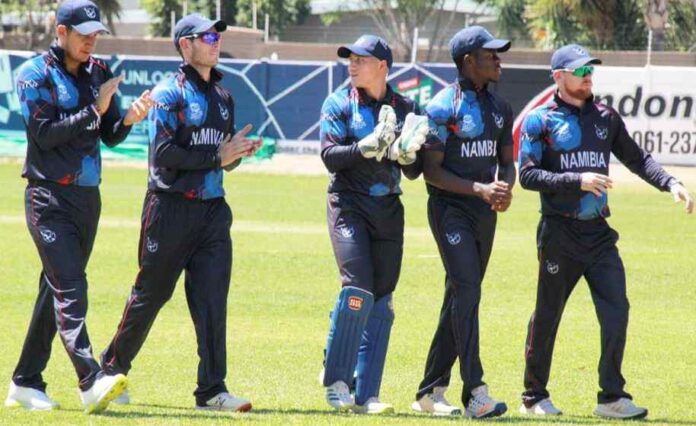 Namibia National Cricket Team represents the Republic of Namibia and has been a member of the International Cricket Council (ICC) since 1992. Namibia Cricket Team competed in the 2003 World Cup in South Africa but lost all of their matches. Namibia’s campaign in the forthcoming World Cup 2021 will begin on October 18 against Sri Lanka. Namibia’s New T20 World Cup Kit for 2021 is composed of light blue, navy blue, red, and yellow. The country’s name is bolded in the center. Its team jersey is one-of-a-kind, stunning, and astonishing. 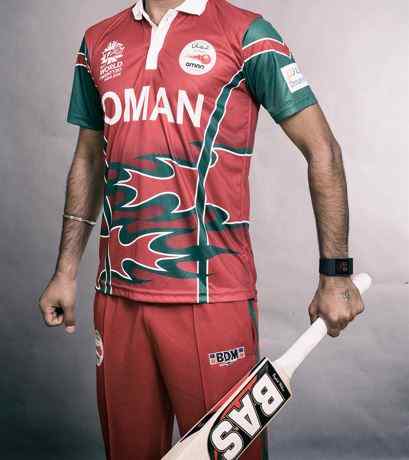 The Oman National Cricket Team is governed by the Oman Cricket Board and will compete in the ICC T20 World Cup 2021 for the first time. On 17 October, Oman will meet Papua New Guinea in the opening match of the T20 World Cup. The new Oman Cricket Team shirt is predominantly red with green sleeves and sponsor branding on the right and left sleeves. The country’s name is printed in dazzling white in the center. 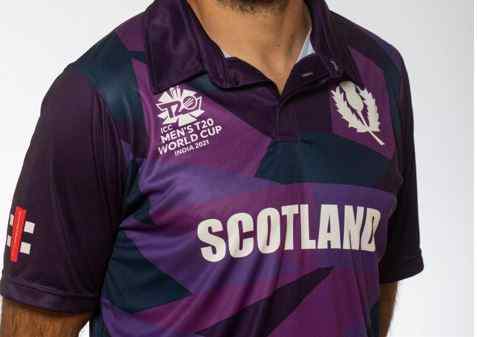 The Scotland National Cricket Team is the national cricket team of Scotland that joined the ICC in 1994 and competed in the World Cups in 1999, 2007, and 2015. Scotland will begin their campaign in the T20 World Cup 2021 against Bangladesh on October 17. Scotland’s New Team Kit 2021 is navy blue with white stripes on the sides; sponsors’ names are printed on the left and right sides, while the country name is placed in white in the center. The new jersey is one-of-a-kind but extremely eye-catching due to its single hue. 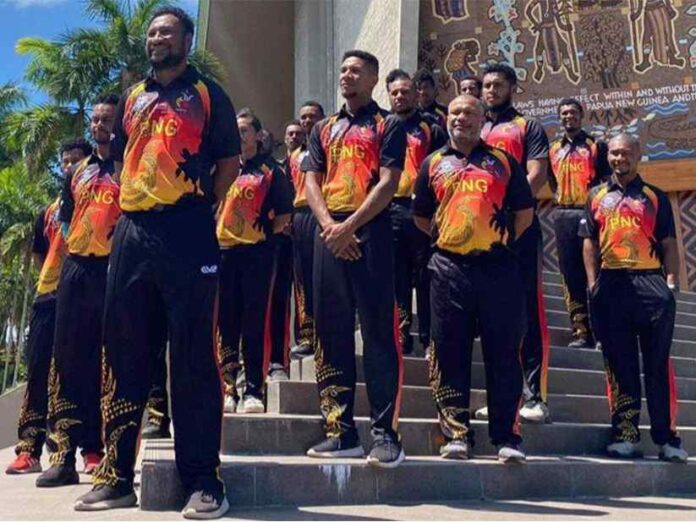 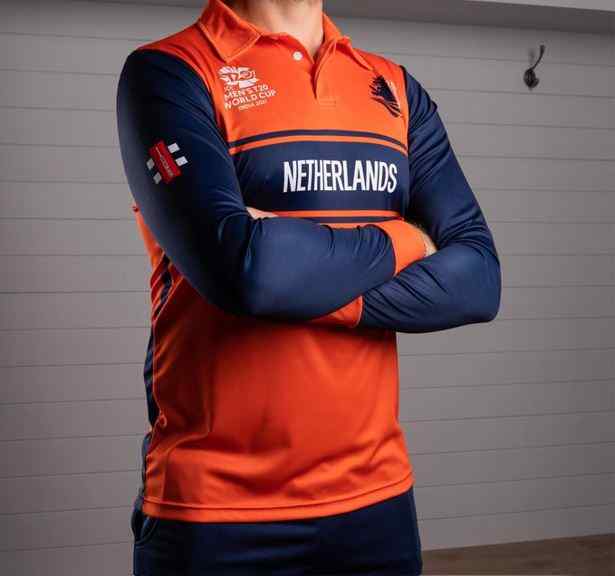 Every Team Jersey and Kit is unique and beautiful in its way, some of them have a quality pattern, some have the best mixture of colors, and some have eye-catching jersey kit colors. But, jerseys won’t be able to win the matches, every cricket team has to put the best in the field to claim the T20 World Cup 2021 Trophy. That’s all, hope you liked the article, make sure to share it with your friends and tell us which Jersey and kit you liked the most.

Wondering where you can Buy New Teams Jersey or Kits to support your favorite team in the ICC T20 World Cup 2021, here you can buy the New Team Kits according to your Country. The New Team Jersey/Kit will be available on each Cricket Board’s Official Website such as PCB, BCCI, CA, ACB CSA, ECB, BCB, and more where you can easily purchase or order the Jersey and Kit online.

10 Facts You Didn’t Know About Paraguay

Why Does San Francisco Sink Deeper into the Earth Every Year