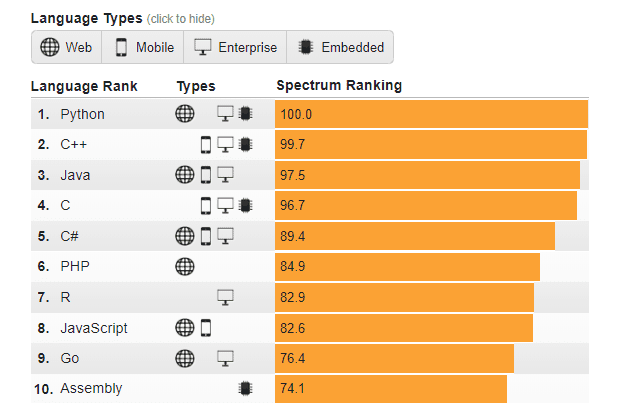 In a technology-controlled world, programming has become one of the most in-demand professions. And if there is something that a developer must master, it is the programming languages, which are increasing every day and have different applications. But which is the most used? What are the Reasons to learn Python and why it’s becoming more popular?

The IEEE Spectrum, the world’s largest professional organization dedicated to engineering and applied sciences, annually compiles a ranking of the most widely used, preferred, and relevant programming languages, which this year placed Python in the first place.

TIOBE index on the most used programming languages in 2019.

The popularity of this programming language has not been limited to the course of 2019 but has been emerging in the rankings of preferences among developers for a few years.

Python has experienced considerable growth since 2015, the year it entered the TOP 10 of the most widely used languages, and four years later, it is among the first three places in user ratings.

So, if you want to enter the world of developers and you still do not know what programming language to learn, you can start with this one that is at the top of the trends. And if you already are, and you haven’t used it yet, you should start considering it.

Python is currently managed by the Python Software Foundation, a non-profit society dedicated to disseminating the language and supporting its evolution. It is licensed under PSFL, derived from  BSD, and compatible with  GPL.

What does this programming language consist of?

Python is powerful and fast; it plays well with others; runs everywhere, and it is friendly and easy to learn”, is the message with which it is described on its website.

For its part, IEEE Spectrum defines it as a dynamic, multi-purpose, multi-paradigm programming language designed to be fast – to learn, use and understand – and to impose a clean and uniform syntax.

Its simplicity, readability, and similarity to the English language make it a natural language to learn, ideal for beginners.

According to Manuel Zaforas, Senior Computer Engineer, who currently leads the innovation initiative in AI and Big Data in Paradigm. Python has a series of characteristics that make it very particular and that, without a doubt, provide it with many advantages and are at the root of its widespread use.

One of its benefits is that Python is cross-platform; that is, it can be run on different operating systems such as Windows, Linux, or Mac simply using the corresponding interpreter.

Some Signs for Hiring an Employment Attorney in 2022

How to Get a Loan Without a Social Security Number?

What is Car Title Loan and How Does It Work?

4 Best Fast Personal Loans For Quick Cash in the USA

ABOUT US
Topandtrending.com is one of the fastest-growing websites. Top and trending is your news, entertainment, top 10 best, music, fashion, sports, tech, games, mobile site. We provide you with the latest news from around the world.
Contact us: topandtrendingofficial@gmail.com
FOLLOW US
© 2022 Developed with ❤️ by team Top and Trending
MORE STORIES
News

Samsung could end the Note series by 2021