Biggest Hotels in the World

While talking about the largest Hotels, you definitely gonna expect the center of enjoyment with plenty of Fantastic Entertainment, Luxurious Activities, Dining, Swimming Pools, Poker, Playing Cards, and more. The reason why some of the World’s top hotels are so big is the outrageous demand for occupancy and the high rate of tourism. However, some amazing hotels are not on the Las Vegas Strip or Macau. 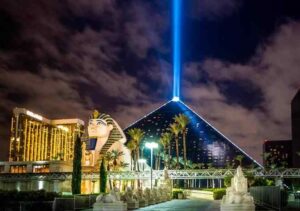 Starting the List of Top 10 Biggest Hotels in the World with Luxor Hotel & Casino. It is a 30-story casino and hotel located in Paradise at the southern end of the Las Vegas, Nevada Strip. The hotel is owned and operated by MGM Resorts International and has more than 2,000 slot machines and 87 board games with a 120,000 square foot (11,000 m2) casino.

It has Egyptian-style architecture, with a pyramid, which Egyptian-style hotel would be complete without one? It also has a giant replica of the sphinx. MGM named the hotel after the Egyptian city of Luxor (former Thebes).

Luxor comprises two other 22-story towers with the main one, and if that’s not grand enough for you, there are rooms in the pyramid that total 4,407 rooms. Luxor was built in 1993, shortly after the Excalibur hotel and casino, but Luxor looks more modern. Its exterior may look more like a 7-star hotel, but in reality, the rooms cost $40 per night. 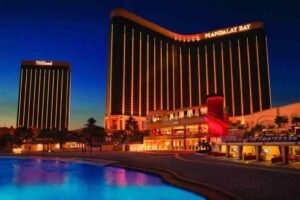 Mandalay Bay is a 43-story luxury casino and resort located in Paradise, Nevada, on the Las Vegas Strip. MGM Resorts International owns and operates Mandalay Bay & Delano. One of the Delano’s buildings operates the four-story hotel, which occupies five floors (35-39) and is located separately within the Bay.

You can observe a pattern in Las Vegas, like many hotels, an older sister hotel is built later. These hotels are so connected to each other that we should probably count them as a single entity. The hotel has 1,117 suites, while Mandalay Bay consists of 3,220 on 43 floors, a total of 4,426.

Room prices in Mandalay Bay start at $77 per night, while THEhotel is a bit more expensive. The hotel offers some of the largest suites in Las Vegas. And also, Mandalay Bay has one of the largest convention centers in the United States. Facilities include a mall, fitness center, swimming pool, spas, and large casinos. That’s what you’ll find at a large Las Vegas hotel. 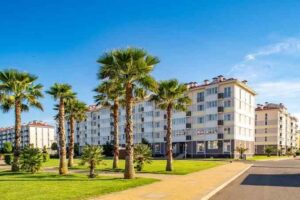 Set in a 300-acre park of subtropical flora, Barkhatnye Sezony Russky Dom Resort Sportivny Kvartal features a gym, a full Wi-Fi area, and a children’s playground. It is a 10-minute walk from Imeretinskaya Bay Beach. Sochi Autodrome has located 4 km from the Olympic Park.

Completed for the Sochi Winter Olympics in 2014, the hotel used to have 8,500 rooms. In 2018, all buildings in the location were sold except 4,688 rooms serving as a hotel. European cuisine is served in the hotel’s kitchen. Various shops, bars, and restaurants can be found within walking distance. 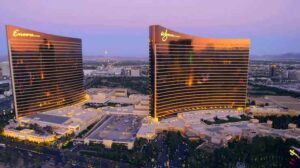 In all its luxury, the Wynn stands with its sister building Encore and is located opposite Mandalay Bay on the opposite side of the Las Vegas Strip. With the adjacent Encore, the entire Wynn resort has a total of 4,748 rooms.

The Encore with Wynn dominates the luxurious market there. Both hotel complexes are located in The Wynn Plaza shopping complex. Wynn Tower was launched in 2005, the Encore in 2008, and both towers are large, but they have an elegant and contemporary style that impresses everyone who enters.

Wynn & Encore offers you all the expected features of the casino, but there’s so much more. The Wynn features an 18-hole golf course and a Ferrari dealership. You will need at least $120 to book a room at night.

With the highest estimated number of rooms (7,500, according to the advertisements), the Izmailov hotel, Moscow, could be the largest hotel in the World. The hotel consists of five buildings inspired by a Greek alphabet from the first five alpha, beta, vega, gamma, and delta. Built-in 1980, its main goal was to host all athletes under one roof at the Olympics.

Cotai Central is a five-hotel resort with a combination of 6,246 rooms and suites from major five-star hotels such as Conrad, Sheraton Grand Macau Hotel, St. Regis, and Holiday Inn.

There are outlets, meeting and convention space, and various dining and entertainment options. And also, there are two casinos, the Pacifica Casino and the Himalayan Casino. The rooms have a total of 560 square feet, and the largest suite has an area of 4000 square feet.

With its limiting operation throughout Macau and the introduction of free buses, including connections to ferry terminals and crossing the boundaries in a few minutes. Conrad Macau Central provides easy access to all Macau airports. 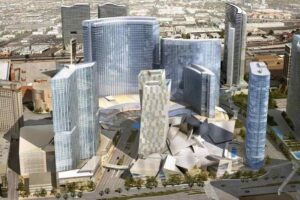 CityCenter Vegas is a large 16,797,000-square-foot hotel with mixed features such as a 76-acre (31-hectare) community center. It is located on the Las Vegas Strip in Paradise, Nevada. MGM Resorts International owns the hotel (again).

CityCenter Towers offer 5,900 hotel rooms to Las Vegas, increasing hotel inventory by nearly 5 percent at a time when visitors had declined to about 2.85 million since 2007. CityCenter is marked, at most, as a successful achievement for almost three years since its opening.

Most of the hotel rooms are full, but the rooms were much smaller than you had initially imagined. However, condo sales did not decrease, and the units sold had heavy discounts. But still, 12 percent of the mall is vacant. 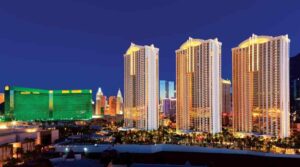 MGM Grand has two-story rental lofts for SKYLOFTS-51. MGM still has 6,772 rooms without SKYLOFTS. The MGM was named Leading World Casino Resort for 2013 and has won several awards.

Here, you can find luxury shops, outdoor pools, several restaurants, and a casino, just like any other hotel. It also has a combined venue for concerts, boxing matches, and performances.

The Venetian and Palazzo hotel complex is located on Excalibur Street, Vegas and is ranked at a second position in the list of Top 10 Biggest & Largest Hotels in the World. Entering this hotel is like a long way to get into another dimension. The Venetian Hotel’s style is completely different, which is also the largest hotel complex in North America.

It has 4,027 rooms, but there are huge rooms, many of which are larger suites than those of other hotels. The 5-star Venetian resort is huge, so naturally, room prices start at $163 per night. It was opened in 1999 and took control of the former Sands property.

The Venetian has a large shopping area full of designer brand shops and a closed waterway that is a replica of the Venice Gondoliers. Palazzo Hotel is right next to the Venetian and has a complex of more than 7,000 suites. Venetian Casino Resort LLC owns Venetian and The Palazzo Las Vegas. 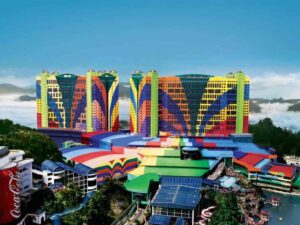 The 7,351-room First World Hotel, between two towers, is the World’s largest hotel in Pahang, Malaysia. Mandarin Oriental Hotel Group, based in Hong Kong, owns this hotel. Genting Theme Park is a short walk away. Today, in 2022, a hotel is being renovated but has 6,118 rooms.

First World Hotel is listed on Ripley’s Believe it or Not and Guinness World Record list as the Biggest Hostel in the List of Top 10 Largest Hotels in the World. Abraj Kudai in Mecca, Saudi Arabia, will soon become the largest hotel in the World. This colossal resort in the Middle East will have 10,000 rooms, 12 towers with 4 and 5-star accommodation, and a large number of 70 on-site restaurants.

Abraj Kudai has located just 2 km from the third tallest building and the World’s tallest clock tower, Abraj Al-Bait. It is currently under construction and is estimated to open in 2017. But due to financial problems in 2015, construction halted in 2015 and is now expected to open around the end of 2020.