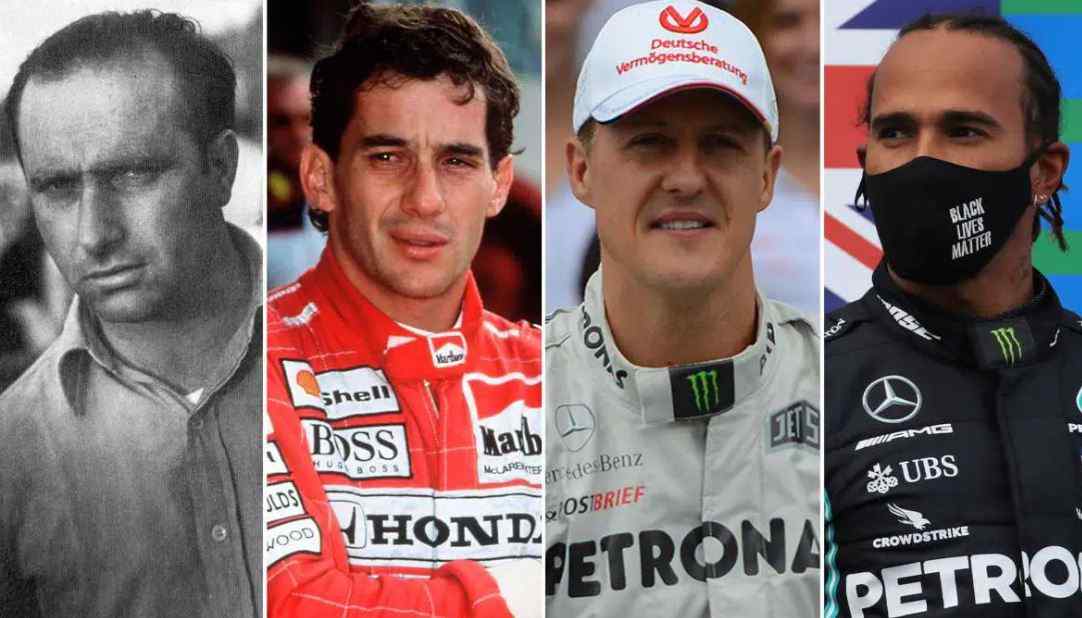 Best F1 Drivers in History. This competition is a faithful display of glamor and love for racing regardless of the risk because the objective is clear: to be the first to reach the finish line! If there is a great event that combines adrenaline, style, and speed, that is Formula 1.

It is the largest automobile race in the world where passion for asphalt is wasted and the greatest technology and design of racing cars is presumed. And that the best F1 drivers in history come together to show what they are made of and why they should win the Grand Prix.

Many factors have influenced that an event of such magnitude is not only held annually but also maintains the same success for decades. And it is that this ranges from the manufacture of a star car prototype, the demonstration of true teamwork, to the training and optimization of each competitor.  Therefore, it is valid to highlight the best and most recognized F1 drivers in history. Those who have left an indelible mark not only on the popular lists but also in the hearts of each of their fans.

This brilliant English driver came overwhelming Formula 1 . He is 37 years old and his great racing talent managed to beat the world record held by Michael Schumacher. He has won the F1 prize 7 times and in the beginning, he rose as the youngest winner in the entire history of Formula One in 2008. To his credit, he has 103 victories and countless world records.

Since then, he has been in charge of giving this competition greater prestige and audience since, thanks to Lewis Hamilton’s participation, the views have been skyrocketing. Many attribute his success to his lifestyle and his social activism since this star has also been an influencer in fashion and music. In this sense, he has become one of the best, most powerful, and most recognized pilots in the world.

For many, he is the king of racing and it is that this German has had a brilliant career. He is the owner of 7 F1 awards, twice runner-up, and creditor of 91 victories and 3,890 points, which makes him the second-best driver in the entire history of F1. He has been a key player in Ferrari’s success he is part of its Drivers’ Academy.

Michael Schumacher has been an idol for the undoubted racing talent that he showed at just 4 years of age. Since then he has participated in multiple competitions, not only in motor racing but also participated in motorcycling, reaffirming his great versatility in the championships. In this sense, he has left an important legacy in his family who have followed in his footsteps in the world of racing.

When talking about the best drivers, we must mention Alain Prost, a Frenchman who won 4 F1 world prizes and 4 runners-up. He has been characterized by having a particular running technique, which is why he is nicknamed El Maestro. He was a legend in the world of motorsports during the 80s and 90s and despite his 67 years, he is still a key player in Formula 1 but through the Alpine team.

Strategist, detailed and passionate. This is how he is remembered in the racing world. His rivalry with Ayrton Senna was epic and gave meaning to this competition. Finally, he won 202 races and became one of the best and most important drivers in this world championship.

This Brazilian demonstrated his great agility and speed in the world of motorsports. His career was short but he won 3 F1 prizes and was runner-up twice. The fastest as he was recognized in Formula 1, he achieved 41 victories and throughout his career, he stood out for his impeccable career. Likewise, he always stood out for his technique and aggressiveness on asphalt and wet tracks.

His competition with Alain Prost was always emblematic and attracted a large audience due to the confrontation between the two greats. His tragic death shocked the world of motorsport as he died in 1994, at the age of 34, when he was racing in the San Marino GP and crashed right into the Tamburello corner. Since then, his legacy has remained valid for new generations. Consequently, he has been one of the best drivers and is among the most important in all of history.

With 2 prizes won in F1, a runner-up position, and 25 victories, Jim Clark emerged as one of the most virtuous drivers of this important world race. He was the star of the Lotus team during the 1960s and was a winner of 25 Grands Prix.

He is recognized for being the best driver of his golden age and for his ability to drive any vehicle. His death was in 1968 when he was participating in the Hockenheim GP. Without a doubt, a giant loss for the world of motorsports.

The great talent of this Italian made him win 2 F1 awards. Likewise, he won 13 victories and 32 Grand Prix. He is recognized for being one of the first drivers of the first season of Formula One in 1950. He was the favorite of the Ferrari, Maserati, and Lancia teams. His last race in Formula One competition was in 1955. On May 26 of that year, he died in his native Italy due to an accident.

He is a great Scottish driver who won 3 F1 prizes and double runner-up. With 27 victories this talented man was a key player in the 60s and 70s for the BRM, Tyrrel, and Matra teams. He had great recognition in the universal motorsport contest to the point that in 1997 he founded his team that lasted 3 years and positioned it in 4th place among the constructors. Today he is 82 years old and has the pleasure of having been part of this story.

He was a very talented Argentine in the racing world who was born in 1911 and rose to fame for having won 5 F1 awards during the 1950s, which makes him worthy of being in this ranking of best drivers. His success was such that he was only dethroned in 2003 by Michael Schumacher. To his credit, he has 24 victories and was part of important teams such as Ferrari, Maserati, Mercedes, and Alfa Romeo.

Likewise, Juan-Manuel Fangio had a great performance in the sports world, becoming president of Mercedes Benz at its headquarters in Argentina during the 1960s and 70s. His last participation was in the Argentine GP in 1974. He later passed away in 1995 when he was 84 years old. Without a doubt, this Latin American is one of the best drivers in F1.

Of course, many names are left out, but in this list, we have collected those who are considered, almost unanimously, the best F1 drivers in all of history. Some are already part of it, others are just building it, but being part of this podium is already great merit.